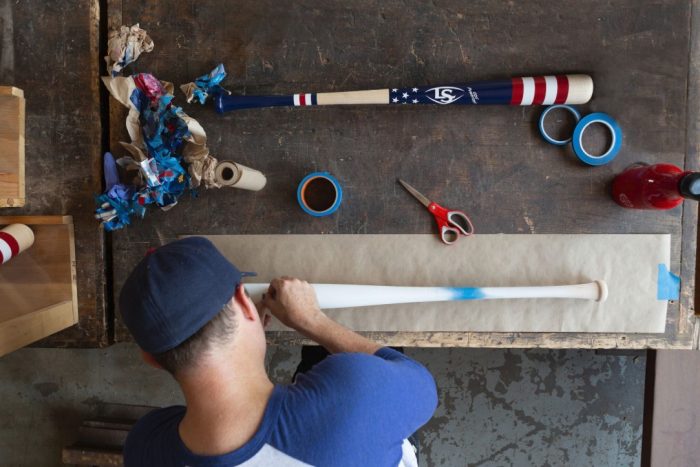 The All Star game brings out so many limited edition bats its crazy. You can check places like our Bryce Harper’s Bat page to see his.

See all our Baseball Bat Reviews.

Here are some aluminum and composite limited edition bats we have documented over the years:

The colors and features of limited edition bats come in many different forms. Some in outlandish colors, and some just in other, more quiet ones. They are also different from their stock colored counterparts. These colors, however, do not change the performance, just the look.

This bat is the most recent major limited edition bat. It released in 2017 and was instantly a favorite. The Cat 7 Limited was made in a drop 10, 5 and 3 (BBCOR). It hit the ground running when it dropped. This was due, in part, to the success of the Cat 7’s normal color way (white with grey and red accents) doing so well already.

It has a black body and white and gold accents. Good luck finding this bat anywhere close to retail, it sold out of many stores very quickly. This bat is great for the player that has lots of swag and needs that extra pop of the colors of their bat. If, of course, they can find it.

The Zero Dark is a 2017 CF Zen limited edition. In some of its sizes the bat was banned. But, DeMarini retooled the bat to pass the standard and you can find this bat retooled and available.

As well, DeMarini’s CF8 came out in 2016 and was very popular upon release. The colorway limited editions for 2016 are called Delta Force. It is still one of our all time best looking bats:

It has a white barrel, with American Flag accents. (Blue and Red Stripes, as well as white stars.) Which is different from the normal color way of white with grey and gold.

It came in -10 and -3 (BBCOR) sizes, and as one could imagine, it sold out very very quickly. It was sold only in brick and mortar stores, which also helps make it rarer than other limited edition small batch bats.

This bat, if it can be found anymore, is the perfect bat for any Patriot that loves to play baseball.

Shockingly, the bat can still be found on Amazon in some sizes for reasonable prices.

It comes with an all black barrel, white lettering and some very sweet looking neon green accents. These colors were quite flashy compared to the normal color of the CF5, which are white and black.

DeMarini’s CFX Hope is a mainstay in DeMarini’s fastpitch line. Every year, the CFX Hope is a breast cancer awareness bat built in partnership with DeMarini. They donate some portion of the proceeds of the revenue from this bat to cancer research/awareness.

It is a limited edition and coloway of the Drop 10 CFX. This is their most popular bat (in the non-Hope version) and it costs the same. If the colors suit your fancy and/or you want to contribute to a great cause the CFX Hope is a great choice.

In 2018 Slugger got in on the limited edition bat by releasing the XENO in a platinum version. Other than the bling-like colorway, there are no differences to the regular XENO. Still, though, the bat is a monster at the plate and comes in the XENO’s most popular size: the drop 10.

Slowpitch bats often come in a limited edition. This is how the market works, really. Small numbers of players picking up unique bats with the tiniest of upgrades. It is, therefore, a long list of slow pitch bats that tend to call themselves “limited.”

But, three bats that fit the bill perfectly, are from 2016 Demarini’s line. DeMarini released three monster limited edition bats. No, seriously, monsters: The Yeti, Chupacabra and Kraken. These were unique color ways on popular ONE slowpitch models.

Today, you’ll have a hard time finding them new in wrapper as the limited edition has long run out of stores. But, you can still find them on places like ebay.

Few bats have captured the imagination in the softball space like the Easton Helmer limited edition. This bat is difficult to find and absolutley rakes. It rates among our most favorite softball bats on the market today.

What is a Limited Edition Bat?

There is no governing body on who or what is called a “Limited Edition.” In fact, all bats are limited in the sense that they aren’t produced in infinite quantities. As such, the use of the word limited is loose and unregulated.

A bat like the CAT 7 limited felt quite limited and they are very hard to find. The CF5 limited is still available, from some places, in wrapper today. But, as a general rule, most limited bats are just that: limited. They are few in quantity and it is very difficult to ever find a deal or discount.

Also, the limited versions of the bat produced AFTER the original. This usually means that companies have a good feel for how many bats will sell and they aren’t left holding a bunch of extra limited inventory.

9 Best Places to Get Trading Pins »