We spent 2 hours in the cage and 1 hour in the field hitting with the 2016 Louisville Slugger 716 Select.. We also spent another 2 hours reading reviews from other players and trying to decipher message boards that discuss this bat. In that 5 hour time, we found the 716 Select to be a lighter swinging hybrid bat built hot out of the wrapper for players who consider themselves occasional power hitters and, due to it’s focused barrel, know how to hit a ball well.

Construction: The 2016 716 Select (like the 2015 Louisville Slugger 715 Select) is a two piece hybrid bat. Meaning, it has a composite handle and an aluminum barrel. The bat also has a composite slug that sits within the transition point of the handle and barrel. This slug both dampens sting on mishits as well as keeps the bat stiff for quality performance. Slugger refers to this as a TRU-3 connective piece since it makes the bat officially 3 pieces.

Compared to last year’s 715, the 2016 comes with two upgrades in an updated color scheme and a black and white camo lizard skin grip. Otherwise, there are no notable differences. The 716 from the 715, by way of performance improvements, are identical—which is not a bad thing considering the 715 was a well received especially at collegiate levels.

This Louisville Slugger 716 bat comes in every imaginable size. From BBCOR to 2 3/4 or 2 5/8 senior barrel and a 2 1/4 youth barrel version, it is likely the 716 can be found in a size you swing. Often, the best place to check sizes is a place like Amazon (search) or eBay (search) like this. 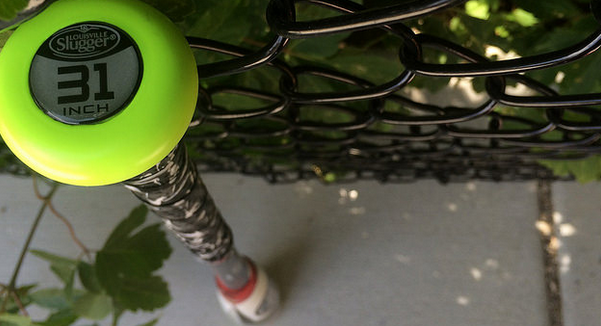 In comparison to other bats, the 716 Select is most similar to the 2016 DeMarini Voodoo Raw or the Easton Hybrid XL. However, it’s swing weight is lighter than both but it’s barrel is smaller than both. If you’d like a lighter swing a bigger barrel, the 2016 Louisville Slugger 916 Prime may be your ticket—although it’s composite barrel will take a bit of working in. If you’d like a stiffer bat with a little more gumption then the 516 Omaha also from slugger should be worth checking out.

We’d quickly recommend the 716 to hitters  who prefer two piece composite bats for their sting dampening, durable barrel and hot out of the wrapper performance to players looking for a lighter swing but often hits for power. This bat, it should be noted, doesn’t swing as light as a 916 Prime or RBZ X3, but for a hybrid it is the lightest you can find in BBCOR (save the possible exception of the DeMarini NVS Vexxum).