Boombah is a direct to consumer company. That is, they do not use third party vendors to deliver their goods to you. Instead, you buy them directly on their site. You will not find them at major sporting goods stores. As such, finding reviews on the Boombah Cannon are not to be found on major vendor sites or the ever growing list of fake thin amazon affiliate sites claiming to review bats. If you can’t get paid for writing a review, then why write it!

Good question, one that does not stop us.

In large measure, this explains why most have never heard of Boombah or, at least, never knew the produced baseball bats. It also explains why a third party blog, not connected to any vendors or manufacturers, can be one of the only reviews found on Boombah bats. No vendor site has any incentive to acknowledge they exist. Long story short, count this as the only independent 2017 Boombah Bat Reviews on the market.

As we mention in the introduction, there are not many places to look on reviews for the Boombah Cannon. As a direct to consumer company they do not sell their bats through major retailers. Those same retailers maintain and publish most of the so-called reviews on any number of bats. Hence, the lack of insight. Alas, you are left with independent blogs who take a close look at these bats and then review them individually. In other words, us.

We did find the 2015 Boombah Cannon review we wrote a few years back worth our time. The 2017 version has not changed much. And, for the record, one of our sons ended up choosing the drop 10 Cannon from 2015 over several other more well known bats. Boombah makes legitimate stuff and their model saves people money. If, and sometimes its a big if, you can simply find them. 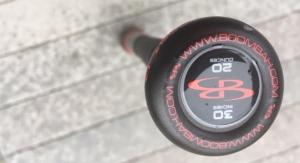 The Boombah line also lends towards the value conscious consumer. Boombah’s direct to consumer model prices bats about $50 less than other new models in the same niche. 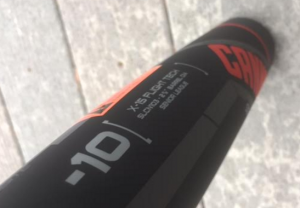 The 2017 Boombah Cannon is produced in both a BBCOR and a drop 10 senior league (2 5/8) barrel size. These are the two major categories in the baseball bat space. As well, these two categories are the same sizes they produced the 2015 Boombah Cannon in too.

The 2017 Boombah, much like the 2015 version, uses a two piece hybrid design. Meaning, the barrel is made of aluminum and the handle composite. In theory, and our experience too, this hybrid design proves to decrease hand ring on mishits. It also gives a smoother smash. In some instances it gives a false positive. That is, an impression the ball was hit very well when, in fact, it was not.

We find that younger players tend to prefer two piece bats more often as it gives them more confidence to swing harder.

Also like the 2015 version, the 2017 uses an extended composite end cap. Adding lighter material at the end of the barrel decreases swing weight and helps for better bat control. Faster speeds at contact usually mean a further hit ball but, do remember, a lighter bat also carries less mass and, hence, less force. It is the age old play between swing weight and swing speed. But, again, younger players tend to appreciate the ability to wield the bat more effectively. Balls in play are better than strike outs.

Unlike the 2015 version, the 2017 Cannon uses a “Flight Tech” feature which gives texture to the barrel of the bat. The Boombah claim is this increases backspin and, therefore, increases ultimate flight distance. This feature is used on other bats on the market—notably some fastpitch bats. While back spin can indeed increase ball distance in theory, we find it unlikely that the paint texture on the barrel can effect this enough to create a difference. But, like they have no proof to say it does, we have no studies to prove it does not.

In the Big Barrel (2 5/8) space,  DeMarini has a hybrid bat that intends for a light swing. The 2017 version is called the DeMarini Voodoo Balanced. (This bat also comes in a BBCOR). In terms of market awareness, massive performance and player appreciation few bats compare to the DeMarini Insane. However, it also swings a little bit heavier than the Cannon as it does not have an extended composite end cap like the Cannon. See our DeMarini Voodoo Balanced Review.

The idea of a two piece hybrid bat that uses an extended composite end cap is no where else to be found. Last year, in 2016, Rawlings made a bat called the TRIO and another called the 5150 Hybrid. These were both hybrid bats that used an extended composite end cap. They scrapped those bats in favor of the new Quatro which is a full composite bat made of two pieces. See our Rawlings Trio Review.

There are several bats in the hybrid space that intend for a light swing. Easton makes one they call the Z-Core Hybrid. It only comes in BBCOR. Its intent is a light swinging hybrid BBCOR bat. But, it does not use the composite end cap. It does have a bigger barrel then the Cannon, but swings a bit heavier. See our full Z-Core Hybrid Review.