After 2 hours in the cage and on the tee with the DeMarini Voodoo One, we have some review thoughts. The One should be considered the 2017 version of the 2016 Insane bat. That bat, you will recall, was a single piece aluminum bat with a moderately sized barrel and a swing weight for big hitters. The 2017 One comes with some upgrades in a slightly larger barrel and slightly lighter swing. But, it is still made for that big hitter who likes a stiff feeling bat. Our 2017 DeMarini Voodoo One Review is below.

Amazon Price Check the Voodoo One.

Although the Voodoo One Balanced is a combination of various DeMarini bat versions from years past, it is really the progeny of the 2016 DeMarini Insane. It is similar in the sense of a single piece alloy bat built for a stronger hitter who likes a metal bat that performs like wood. However, it is also different in its lighter swing weight and larger barrel. These changes are attributed to the new alloy upgrade in the bat. 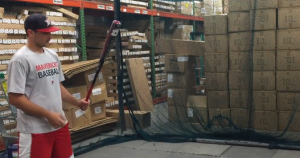 Although a lighter swing and slightly larger barrel then the 2016 DeMarini Insane, the Voodoo One is still built for big hitters who prefer the feel of a one piece aluminum bat. Consider the One hot out of the wrapper and expect it to have a more wood-like feel than any other bat in DeMarin’s 2017 class. If that is what you are looking for then this aluminum log might be your ticket.

We would recommend the bat to players who:

There are a number of bats in the single piece aluminum alloy space with a focus on top end performance. The 517 from Louisville Slugger, Marucci CAT 7 and Easton Z-Core Speed all come to mind. It is difficult for us decide which one is better—especially considering we’ve yet to hit with the Voodoo One.

Here are some folks at Closeoutbats taking the Voodoo One for a spin.

We exchanged many emails with DeMarini’s team on the construction of the new 2017 DeMarini Voodoo One. Much of that information can be found on DeMarini’s site under the Voodoo One section. Closeoutbats.com has a nice video up with some hitting that we included above.