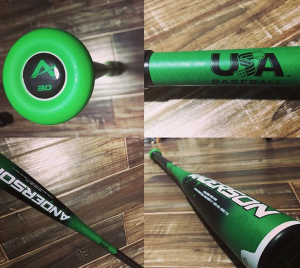 We spent several hours using the 2018 Anderson Techzilla S-Series bat before writing this review. That includes using the bat during live pitching with multiple hitters, hitting with the bat in cage and measuring many of its metrics like exit speed and swing weight.

On the whole, the Techzilla S-Series should be considered a top end performance USA Bat in the Hybrid Drop 9 space.

We spent several hours using the 2018 Anderson Techzilla S-Series bat before writing this review. That includes using the bat during live pitching with multiple hitters, hitting with the bat in cage and measuring many of its metrics like exit speed and swing weight.

On the whole, the Techzilla S-Series should be considered a top end performance USA Bat in the Hybrid Drop 9 space.

There are so few great options in the 2018 USA Bat space it is very easy to put the S-Series Techzilla on the short list of anyone. If you are a hitter that wants the power found in a true drop 9, want a great feel on hits and mishits, would like to try something off the beaten path then put the S-Series on your short list. If you also want an aluminum barrel have a mid $200 budget then might we suggest you just found your 2018 bat?

Anderson is a proven bat company committed to delivering legitimate options to the space. And, who doesn’t want to try out the new Techzilla? The barrel profile is nothing to write home about. It measures under the average of the space. But, we think, barrel profile is way overrated anyways. As of this writing the bat is only available in a 30-inch. But, they expect that to change very shortly. Don’t be scared off by the drop 9 categorization. This bat swings lighter than a few drop 10’s in the 2018 USA space.

The price point for a performance bat is reasonable although, we admit, we’d being falling over ourselves if it was more like $179. The feel on contact is not a smooth as a CF Zen, which we think leads the class, but is also more than $100 less expensive. (It does, mind you, have a better than average feel in the two piece USA Bat space).

In 2006 and 2007 the hottest baseball bat on the planet was the double walled aluminum Techzilla from a small company named Anderson.

The most obvious similar bat to the S-Series USA Techzilla is Easton’s 2018 Beast X Hybrid. That Easton bat is considered by most the hottest bat on the USA Bat market. However, that bat also drives a high price AND is should be considered at least a drop 9 if not a drop 8. See our full 2018 Easton Beast X Hybrid USA Bat Review.

Mizuno also makes a two piece hybrid bat called the Covert that is a drop 9. In terms of price and construction both the Covert and the S-Series are very similar. We like how both of them swing, prefer the feel on the S-Series more than the Covert but the Covert does have a bigger barrel profile. See our full 2018 Covert USA Bat Review.

The 2018 Mizuno Covert is a two piece hybrid bat in its third year of production. The baseball bat’s first year, it ran under the name NightHawk. In 2017, it was referred to as the Covert.

Industry Take on the 2019 Techzilla

“In regards to your question, I think the players that will see the most success with this bat are players that have the strength to swing a slightly heavier bat. The Techzilla has always been a bat built with the elite hitter in mind. If the player is strong enough to swing it, the Techzilla will reward the them with hard hits and an overall very good feel. Also, the Techzilla is one of the most unique looking bats out.”

Who is Anderson Bats?

Although many have never heard of Anderson bats, they are a legit player in the space and have been for a long time. Those in the fastpitch market know they make a killer Rocketech that does fantastically in cold weather. They also once made a single piece aluminum youth bat that would singe the hair off your eyebrows.

Different then other baseball Techzilla’s of year’s past, the 2018 S-Series USA Bat is a two piece hybrid bat. Meaning, the handle is made of composite and the barrel is aluminum.

Our experience to date with USA Bats tends to lend preference towards two piece hybrid bats. We have seen younger players appreciate the smoother feel of a two piece bat and comment on the hot out of the wrapper performance of an alloy barrel. An aluminum barrel doesn’t require any break in and the lack of experience about USA Bat performance gives these barrels no questioning if they are ready to go (like it happens on composite).

The drop 9 is simply an honest assessment of the barrels swing weight and actual weight. Other bats in the space, and we talk about this ad naseum elsewhere, rarely weigh what they say. In fact, based on actual weight, most drop 10 bats in the USA 2018 space should be drop 9s. The Techzilla weighs and swings no different then them but, instead, is simply stated as a correct drop 9.

Although categorized as an endloaded in most of the marketing literature we could find, the bat we actually think it fits right in the wheel house of most drop 9 hitters. The 30/21 has a swing weight only 5% heavier than the lightest swinging 30/20 drop 10 USA Bats. And, compared to some so called “drop 10’s” in the USA Space it actually swings lighter. (We measured its MOI around 5100 units on the 30/21. Compare that to the 31/21 Beast X Hybrid which we found to be 6800).