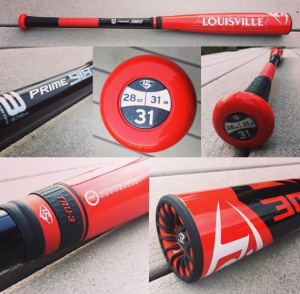 He loved the smooth feel on hits and mishits as well as the occasional bursts of power. The balance was right in line for this 2 hole base hitting type player. We would recommend the the bat for the same. That insight, and others, are found in this 2019 Louisville Slugger 918 Review.

He loved the smooth feel on hits and mishits as well as the occasional bursts of power. The balance was right in line for this 2 hole base hitting type player. We would recommend the the bat for the same. That insight, and others, are found in this 2019 Louisville Slugger 918 Review.

This is Slugger’s 3rd iteration of their high end two piece composite bat. It has improved, no doubt. Online reviews give it great ratings and most players who want a light swinging two piece composite bat in the BBCOR space are pleased. Good performance and a top shelf feel—it is hard to even make your hands hurt.

Not sure why the USSSA big barrel Prime series of bats from Slugger have failed to gain traction in the Big Barrel space. Seems like players tend towards DeMarini’s CF Zen or the Cat 7 or Cat 8 before they go this route. Regardless, these bats are real good finds and you often pick one up for cheap.

The most exciting thing for the 2018 Slugger 918 Prime is the opportunity to create a custom bat. Slugger has taken, almost verbatim, the site from their sister company DeMarini and built the opportunity to produce a custom bat. We were given a chance to take the process for a spin pre-release and can say it was as smooth as we could hope for. Dozens of great color options, the chance to personalize the barrel and the lizard skin options were all great touches. You can expect an update to this page when we get our hands on our Custom 918. Here is an image of the bat we produced.

After 2 solid hours in the cage with Slugger's 2017 917 Prime in tow we have a good grasp on its total performance, how it compares to it's predecessor and what type of hitter will appreciate this bat the most.

At the time of this writing, the MAKO Beast is the most recent BBCOR bat on the market for Easton. It is a 2017 model. Soon, for 2018, Easton will release an Easton Ghost bat in BBCOR. At this point, how comparable that bat will be to the 917 Prime is anyone’s guess.

See the Beast and other BBCOR bat reviews here.

Easton’s flagship baseball bat line for 2018 is the Easton Ghost X. The Mako is no longer. We have watched players swing the new Ghost X at length. The USSSA drop 5 is highly recommendable. The drop 10 and BBCOR versions are solid. The USA version of the bat is, to put it mildly, difficult to recommend due to some strange vibration issues it creates in the hands. Easton never quite admitted as much, but when we and a number of others hit the bat it just didn’t feel right.

We spent considerable time with the 2018 Rawlings Quatro in both real game work as well as cage time.

It took the requisite 4 weeks to get out 918 Custom. Although the pictures don’t quite do it justice, the thing is flat out beautiful. 918 Upgrades don’t just stop at the custom option selector. Compared to the 917, you can expect a larger barrel. This is made possible by a new composite structure and the change of a lighter weight end cap. And, a lighter end cap allows for more mass in the barrel. Slugger smartly used more of that mass to create a larger barrel.

The 2018 Prime brings with it a new end cap and a new composite structure. This, ultimatley, produces a larger barrel than the 917 Prime and should be a welcome relief to those who found the 917 lacking in barrel size.

The new micro composite barrel structure also adds to the weight decrease this year. Expect a light swinging two piece composite with a good sized barrel. All, we think, great upgrades from the 2017 version. And, if the price is right, worth the premium.