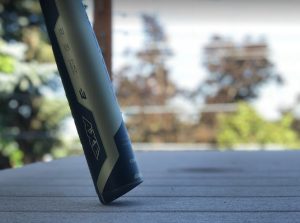 We hit with the BBCOR version of the 2019 Axe Avenge. This two piece composite bat felt great on mishits and swung with a lighter swing weight than the previous year’s version.

Our hitters liked the grip and, accustomed to the ergonomic handle, are big fans of the way it feels. Early in the lineup hitters, as well as the occasionally power guy, should like the bat’s performance. In 2019, expect a USSSA and USA Version of the Axe Avenge too. In this review, we dis… Jump to the full review.

We hit with the BBCOR version of the 2019 Axe Avenge. This two piece composite bat felt great on mishits and swung with a lighter swing weight than the previous year’s version.

Our hitters liked the grip and, accustomed to the ergonomic handle, are big fans of the way it feels. Early in the lineup hitters, as well as the occasionally power guy, should like the bat’s performance. In 2019, expect a USSSA and USA Version of the Axe Avenge too. In this review, we discuss more of what you can expect for the 2019 Axe Avenge. (See all our 2019 BBCOR Bat Reviews)

If you thought the Axe Avenge via 2018 swung a bit too heavy for you then it would be time to reconsider the 2019 version. If the Axe Avenge is what you loved in 2018 then consider, possibly, up-sizing an inch to accommodate the lighter swing weight for 2019 version. The Axe is the lightest swinging BBCOR bat we measured (which was all of them).

The USSSA Axe Avenge isn’t the ‘lightest’ bat out there, but it is light enough to be considered a balanced bat. It, too, of course has the shaped handle and a barrel built for one sided hitting. This two piece composite struggles to break into the top tier of two piece composite bats. And, at the price piont, lots of consumers and hitters opt for the more well known CF Zens and Rawlings Quatro’s. But, the Axe Avenge USSSA holds its own.

There are considerable differences between the 2018 and 2019 Axe Avenge. The differences, ultimately, drive a lighter swinging bat with a larger usable barrel size and a smoother feel on mishits. Those functional differences come from:

In terms of an ergonomic handle, one sided hitting and an arrow shaped end cap no bat, obviously, compared to the Axe Avenge. The asymmetric handle drives a serious amount of innovation no other bat can approach.

But, in terms of a two piece composite bat with a light swing weight and added tech to dampen sting there are at least a few options out there. In terms of the most popular comparison, DeMarini’s CF Zen is a reasonable side by side. Both bats have big barrels, very similar swing weights (the 2019 version that is) and technology in the connection piece to help dampen sting on mishits. They both also price out the same and have a BBCOR, USA and USSSA version.

After hitting with the 919 Prime from Slugger in four games and several hundred hits in the cage, among a few different players, this is our 2019 Louisville Slugger 919 Prime Review. Generally, the bat feels much like it did last year.

Rawlings looks to improve upon the durability of their flagship bat with the 2019 Rawlings Quatro Pro. The BBCOR version of the bat was our favorite bbcor bat in 2018.

Easton’s top end bat for 2019 is called the Project 3 ADV. The ADV comes with a few features we’ve yet to ever see on other bats including a Power Boost knob and an improvement in the connective piece. 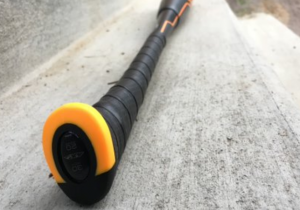 We have extolled the virtue of the Axe handle since we first reviewed their bats in 2015. We liked them even before guys like Pedroia and Mookie Betts heard of them let alone were swinging them in MLB games (on Victus Bats).

The idea of a handle built for the shape of your hands to produce a better swing path would make sense even if there wasn’t any data to back it up. (But, there is). The fact a host of MLB guys have used it in games (including folks like Harper, Correa and Swanson) gives credence to the claim. This isn’t just hype and faddish.

Old timers and those who sell bats for other companies will tell you the Axe handle is hokey pokey. While there have been plenty of marketing hoaxes in the industry the Axe handle just isn’t one of them. It’s a legit addition to a bat and something we’ve written about since the genesis of this site. If Axe didn’t have a secure patent on the idea then we have no doubt the aluminum and composite bat space would be all over this.

That said, there are a number of fantastic bats on the market these days. The two piece composite BBCOR space is chalk full of laser making baseball bats. Without a doubt in our minds, after years of hitting everything, the Axe is on that list, too.

The 2019 Axe Avenge in USA is actually referred to as an Axe Avenge One. It is a single piece composite USA Bat that we review elsewhere on the site.

Our measurements showed the Axe Avenge as tied for the lightest swinging two piece composite bat in the BBCOR 33/30 space. The 618 Solo was a bit lighter, but it runs a single piece aluminum and is a much different bat.

Axe added a resin with charged particles in the composite structure of the barrel. Hard to tell from cage work among several hitters how this “Charged Carbon” changes performance from the 2018 version. Only a season full of feedback from across the country will tell. But, so far feedback about performance has been positive.

The 2019 Axe Avenge comes in a USSSA and a BBCOR. The USA version of the Avenge is referred to as the Avenge One and is actually a single piece composite bat that we review elsewhere. See our related bats section for a link.

Hey, tell us what you think about this very light swinging Axe Avenge.