Like the Adidas RBZ bat Adidas released to the public last year the Aero Burner is using a TaylorMade club line name (which is also owned by Adidas) to brand the bat—lessons from the tee-box to the batter’s box, if you will. While that tidbit of information doesn’t quite amount to a full on “Adidas Aero Burner Baseball Bat Review”, it does get us on the right track, at least, and as new information arises. We will update this page as we get our hands on the bat as well as get reports from players using it.

We’ve also confirmed the intent is for the Adidas Aero Burner bat to be released in the “summertime” of 2016.

The Adidas Aero Burner baseball bat, as far as we can tell from some Getty Images and listening to the bats contact during Hurricane games, is that the bat is a single piece aluminum alloy in the BBCOR space. It performs well enough that Miami Hurricane players are willing to use it consistently. 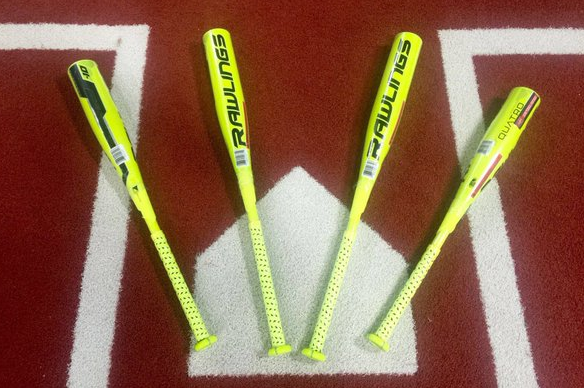 What we also notice is other major collegiate teams, which are the flagship programs of other brands, do NOT have their new 2017 bats in hand (or at least in game) just yet. DeMarini, Slugger and Easton appear a bit behind the curve when it comes to Adidas—or clearly have a different strategy then the Adidas brand who is pushing hard to make serious waves in the aluminum and composite bat space. Rawlings, we should note, has let at least some players use their new Quarto BBCOR bat which should be coming out in the fall.

We suspect this Aero Burner bat will replace the 2015 Adidas EQT X1 which served as the single piece and slightly heavier swinging bat made in the wheel house for collegiate players and advanced high school players. This is a guess on our part. Those players who can appreciate direct feedback on the hands in payment of better feeling drives and more power transfer to the ball might find it interesting enough. But we’ll need to wait and see.

The Adidas EQT X1 bat wasn’t produced in a senior league, big barrel or youth space and we have no news if Adidas plans on getting into that market with the Aero Burner. But with BPF 1.15 standards changing to the USABats standard in January of 2018 we think it very unlikely Adidas will produce a bat for younger players which will be legal for only a year.

You can see the bat in action when Miami is up to bat in this video.

The Adidas EQT X1 wasn’t particularly well received, at least among non-collegiate players with school obligatory contracts. This isn’t to say the X1 wasn’t a good bat, as we discuss in our review, but the uptake in a seriously saturated market dominated by Easton, DeMarini, Slugger and Rawlings will take more than a single piece aluminum bat to break through the rank and file of American baseball branding.

The attachment of the Aero Burner to the TaylorMade Aero-Burner name is a great move and will fit right into Adidas RBZ X3 which we absolutely loved as a two piece composite BBCOR. Adidas, if you have yet to notice, appears dead serious in breaking through the aluminum and composite baseball bat space.

The moment we gather more information on the Adidas Aero Burner BBCOR bat we’ll be sure to update this page, so check back often.