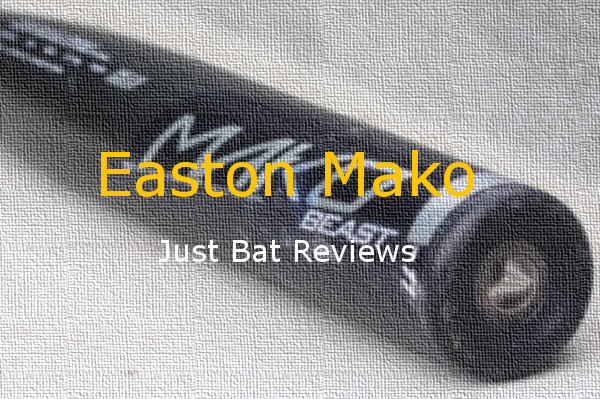 If anyone has been more prolific in their coverage of the Easton Mako, we would be surprised. Yes, that includes even Easton’s marketing team. Of the 600+ articles we carry on this site, no fewer than 10% of them address the Easton MAKO. The bat has dominated the airwaves as much as it has dominated the field since its inception in 2014. After four full seasons of raking, Easton hangs up the name for now, in favor of the new Easton Ghost.

Easton produced the Mako in every bat type on the planet. It was produced in dozens of iterations for baseball, fastpitch and softball. It was, you may recall, the first (and only since) bat to use a spinning handle in some of its versions.

The Mako redefined barrel size and truly cemented the two piece composite design as the elite stick in baseball. Also memorable, the Mako set new (and ridiculous) records for price points. The 2015 Mako Torq in BBCOR was literally $549 retail. The 2014 Little League Youth Mako, the orange one, set records for sales in every category. It was the single most dominant bat in both performance and market share, in any space ever and ever since. (With the possible exception of Louisville Slugger in the MLB circa 1930). That bat put Easton on top in the youth barrel space and much of that dominance remains today.

Although some different iterations of the Mako popped up later, the Mako’s mainstay construction was a two piece composite design with a CXN connective piece. Easton did update the composite in 2016 and extended the barrel in 2017 with the Beast. But otherwise, the bat remained largely unchanged.

After the Easton Mako’s monster success in 2014 and 2015, Easton added a ridiculous amount of sizes and iterations to the line. Of the 40 performance BBCOR bats produced in 2016, nearly 10 of them were some version of the Easton Mako. They made, among other things, an end loaded version of the bat called an XL and a spinning handle version of the bat called a Torq. The iterations were endless and terribly difficult to keep track of. By most accounts, the explosion of the sizing iterations was not received well by vendors and the public, and in the following year Easton pared down the iterations to just a couple—more in line with their 2015 and 2014 lineup.

The major exception to the Mako line of bats is the Mako Hyperlite. In its waning 2017 year, Easton put the Mako name on a less expensive single piece composite bat referred to as the Mako Hyperlite. It was a tell tale sign that Easton had run out of ideas on the Mako. The following year, 2018, marked the first year in five that Easton would not produce a Mako named bat. Easton’s top tier performance bats would now be called the Easton Ghost.

USSSA 1.15 Bat Swing Weights | Drop 10 Mass Moment of InertiaWe measured the swing weight of almost every 31/21 drop 10 USSSA 1.15 bat for 2018. Most bats, regardless of[…]Read MoreBBCOR Swing Weights | Lightest & Heaviest BBCORWe measured the swing weights of 2018 33-inch BBCOR bats. As a group there was no greater than a 12.2%[…]Read MoreUSABat Swing Weights | Lightest Swinging USABatAt the risk of overstating our position, we submit this series of articles on a bat’s actual weight compared to[…]Read More2018 Rawlings USABat Quatro ReviewIn addition to our 2018 Quatro BBCOR review we write this 2018 Rawlings USABat Quatro Review. We used the 31[…]Read MoreAxe Handle on a Chandler BatAxe has been an a war path of licensing deals this off season. A few short weeks ago they announced[…]Read More2018 Easton Ghost X Hyperlite USABat ReviewIn short, we think the Easton Ghost X Hyperlite is the best drop 11 USABat on the market for 2018.[…]Read More