MAKO TORQ Reviews: What A Bat Should Do

A bat with a revolutionary spinning handle also backed by the biggest non-wood bat company in the world was bound to create some blogsphere and little league complex buzz. And boy did it ever. At one point we saw 4 out of every 10 bat review searches on Google specifically directed toward the 2015 Easton MAKO TORQ.

Reviews opined that a bat allowing the bottom hand to rotate would ruin mechanics, disrupt timeless proven coaching techniques and do absolutely nothing to help younger ball players transition into wood baseball bats. These fair questions notwithstanding, nobody actually asked the real question that matters: do I hit the ball better with the MAKO TORQ?

The short answer, after extensive testing on our part, is: Yes. The MAKO TORQ allows players to hit the ball better.  Now, we are not saying that a strikeout king will be at the top of the order; or the 1st hitter in the line up will now get pee-tested every Saturday morning on suspicion of doping. Nor will your #4 hitter start bridging balls like Giancarlo Stanton.

But what we are saying is this:

So, put down all the hype and sales pitch and dissent from the haters for one second and consider the facts: getting your hands inside the ball and staying on the pitch plane longer makes for better hitting. The end. By extension, the MAKO TORQ does enhance the principles associated with effective hitting. Or, said flatly, you hit better with the TORQ.

Let’s now address the elephant in the room: pricing.

Is the bat overpriced?

If that word had any meaning left in little league sports then I guess the answer would be yes. Remember though, you just paid a $750 team fee, $120 uniform fee with another $80 for cleats—throw in another several hundred in gas and food to drive around your state. All of that so you can watch a 14 year-old play baseball. If this conversation were about doing rational things with money then we should have stopped way before we got to this point. 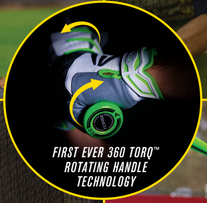 With that tongue in cheek response out of the way, I believe the bat’s slow acceptance out of the gate is MUCH more a function of its price than its disruptive technology.

While the bat’s initial price point is noticeably above what we’ve seen in this space it doesn’t make it any more irrational than a $450 bat people bought boat loads of last year. (Okay, maybe $100 more irrational, but I feel my greater point stands: if Dave Ramsey’s financial planning seminar is our beacon of light in choosing how our money was spent on our children’s sporting adventures then you wouldn’t be here reading this blog—you’d be at WalMart looking for a $50 bat).

None of what we’ve argued above makes the MAKO TORQ any more “traditional.” And it doesn’t deflect any real concerns about the transition to wood bats or any potential learning curve a player may face as he becomes comfortable with a spinning bottom hand.

As well, this bat is NOT end loaded and, as we pointed out above, it isn’t anywhere on the scale of inexpensive. So if any of those points are deal breakers then this bat is not for you.

But if you are more concerned about what a baseball bat is supposed to do instead of what it is supposed to be, then getting a bat whose bottom hand rotates could make all the sense in the world. At a minimum it isn’t doing anything close to disrespecting the game. In fact, we’d be the first to argue, a bat with a spinning bottom handle is simply making good and great hitters better.

And, as we see it, the MAKO TORQ makes better hitters better. We are confident that those who can put aside any concerns for traditionalism and budget will find a bat that puts the crack in crackerjack.

If you are looking for a deal on one of these (although it almost always comes without warranty) check here. Otherwise, check here.

2015 Baseball Bat Releases: 3 Bats You Should Have Considered But Didn’t »