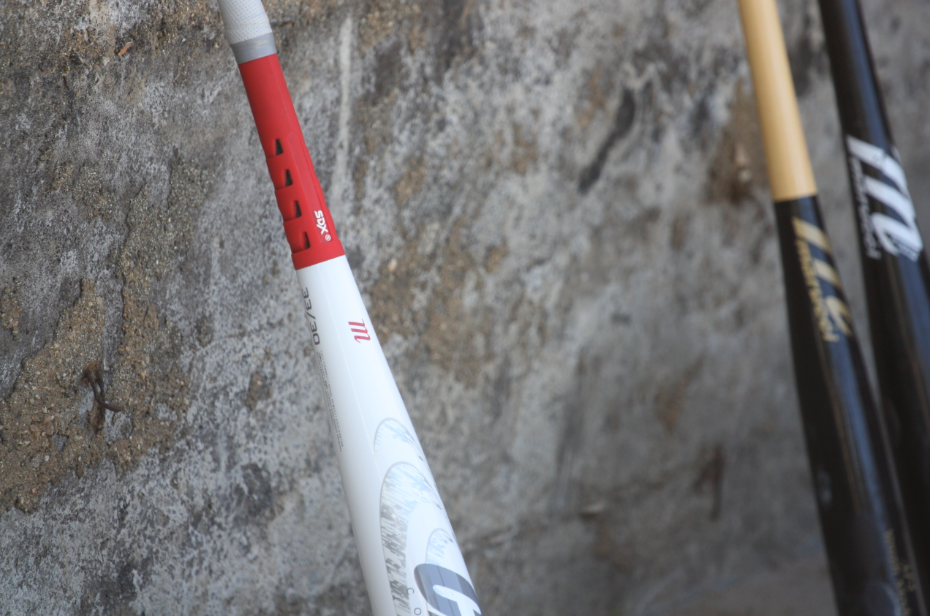 After testing every baseball, slow pitch and fastpitch bat on the market we think the best home run derby bat is the Xeno drop 8 in fastpitch, the CAT 7 Connect or 718 Select in BBCOR, the drop 5 DeMarini CF Zen in USSSA and the Easton Beast X Hybrid in USA. Generally, for each bat, players loved the big barrels, end loaded feel and exit speeds. A stiffer shaft and heavier MOI lent itself to longer hits. Granted, the bats are harder to swing than their lighter counterparts, but those that are going for the long ball can make an impact with those bats.

We review the best slowpitch home run derby bats in their own section.

Marucci’s Cat 7 Connect is a two piece hybrid built with the heavy hitting high school or college player in mind. The bat comes with a 10% end load (meaning it swing 10% heavier than a bat like the CAT 7). The barrel is the same as the CAT 7—which people love. And the connective piece makes for a good feel on both hits and mishits. Price check: Amazon.com. See our full review: Marucci CAT 7 Connect Review.

There are several great big hitting BBCOR bats on the market. We tended towards two piece, hybrid bats for their durability and ultra smooth feel. This includes the Marucci CAT 7 connect as well as the 718 Select. Both are end loaded sticks with a good sized barrel and a great feel on contact.

If you can swing one of those hard, then we like the idea of a bat like the 518 Omaha or the Easton Beast X Loaded.

The 718 Select, brought back by popular demand, is a BBCOR only bat with a massive end load. In fact, it swings as one of the heaviest BBCOR’s around (and the heaviest hybrid). The bat’s two piece connection (called the TRU3) makes for an ultra smooth feel and is the same as the 918 Prime. Throw in a Lizard Skin grip and a nice tapered knob feel and you’ve got yourself a winner. This is a favorite of several college level players. Price check: Amazon.com. See our full review: 2018 718 Select Review.

We discuss this at length elsewhere but, in short, single piece bats are more capable of transferring more power to the ball. This is just some basic physics: stiffer bats don’t give as much. And less give means more energy transferred to the ball.

That said, however, we really like some single piece aluminum heavier swinging bats too for hitting home runs. And, turns out, advanced collegiate hitters who love the long ball often prefer single piece bats over hybrids.

We talk a lot about this bat in our best drop 5 baseball bat article. It is an absolute monster. Any who has hit with it, and can swing it, absolutely loves it. The price has come down a little bit since DeMarini released the 2019 version of the same bat. But this 2017 DeMarini Drop 5 is a beast. Way worth it if you can find it. Price check: Amazon.com. See our full review: 2017 DeMarini CF Zen Review.

Remember, though, that scale weight is not swing weight. Many make this mistake and assume the weight on a scale is how hard it is to swing the bat. In reality, though, how the weight is distributed along the length of the bat is more important than the actual total weight of the bat.

The biggest versions of the bats on this list:

Easton’s Beast X Hybrid is an over-weighted drop 10 bat. Meaning, it should probably be rated as a drop 8. But, despite its mis-categorization, the bat is a bomb maker. Players who can swing this bat love it. We also really like the 718 Select in a drop 5 too. But, in terms of the best exit speeds we could generate the USA Beast X Hybrid is it. Price check: Amazon.com. See our full review: Easton Beast X Hybrid Review.

What is the Drop?

The drop of a bat is the numerical difference between the length of the bat in inches and the weight of the bat in ounces. For example, a 33-inch long bat that weighs 30 ounces is considered a drop 3.

Watch virtually any big hitting fastpitch player in college and they’ll be swinging the drop 8 Xeno. This is a monster bat with a nice end load, great feel and familiar sound. It swings about the heaviest of the swing weights with any bat we could measure. Price check: Amazon.com. See our full review: Slugger Xeno Drop 8 Review.