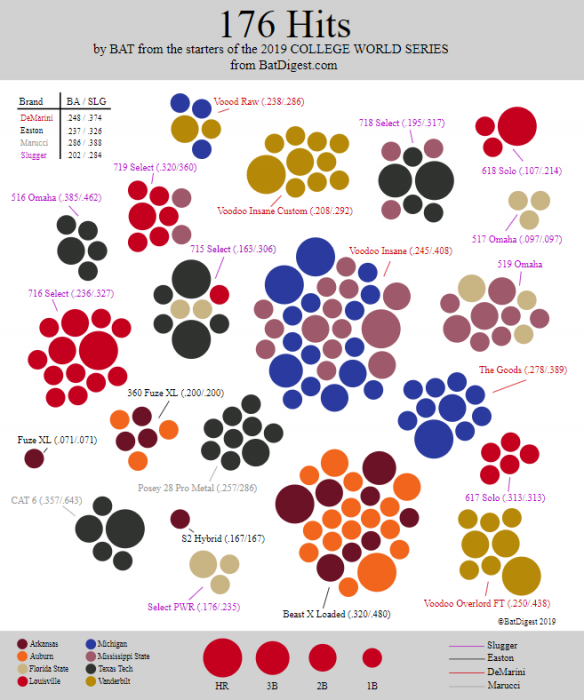 If you want even more updates, check out our twitter feed.

Well, we made it back from the 2019 CWS. The Vandy boys pulled it off (again). It was a fun run. Here’s our video of the Wilson shop called the Baseball Experience.

Ever worked on a project much longer than you ever should have? Well, that would be this next step.

This is every HIT documented from the STARTERS in the 2019 College World Series. It shows a number of interesting things that you can find for yourself. Of some note is the Batting Average and Slugging Percentage (BA/SLG) by brand. It runs down like this:

Also, do note, this is FROM those in the starting line ups of the first round of CWS Omaha games. That includes 176 hits. Overall, there were close to 200 hits in the series. But, the difference of 30 or so hits was from hitters who did not start the first game. In most cases these extra hits were produced from pinch hitters or additional DH guys. The marginal gain from tracking down those specific at bats didn’t feel worth the overall value in the chart below. Albeit therefore incomplete, it is what it is.

And we are sticking to it.

Many college baseball teams have some sort of bat contract or agreement. We assume, although this is just an educated guess, some amount of money exchanges hands whereas a company provides gear and money to a team for their brand’s exclusive use. How much money exchanges hands for this we don’t know.

In any event, it is fun to see which teams use which bats. Here is a break down of the bat brands used by the eight different teams in the 2019 college world series.

Six of the eight teams in the 2019 CWS use the same brand of bat. This is likely due to the fact the schools have bat contracts/agreements with the manufacturer. They are, for lack of a better term, sponsors. Many of those players, though, don’t swing the newer stuff (2019 or 2020). A few folks even swing some real throwback bats in the 2014 S2 and the 2015 Voodoo Overlord FT.

Also, not a single player in the starting lineup for uses a composite barrelled bat. We find that uncanny.

We’ve tracked this phenomenon over the last several years. Most elite college players prefer stiffer and heavier bats. Invariably, companies produce that type of bat in aluminum barrelled versions. This includes single piece aluminum like the Omaha or Beast X and many hybrid bats like the Voodoo and Select series.

Hence, the disparity between the CWS and popular BBCOR bats at the high school level.

This chart tracks the bats used by the starting batting orders of the 72 players in the 2019 Baseball college world series. The colors represent the majority of the brand used in each given grouping. So, for example, Mississippi State uses a majority of Slugger bats although a few use the 2019 Voodoo series of bats too. Texas Tech uses a three different brands while all the others (save Mississippi State) are exclusive.

After the first round of play we can document the bat popularity among those players who made the finals in the 2019 NCAA Baseball College world series.

This only takes into account the starting batting order of each team. That makes, with 8 teams in Omaha, 72 different players.

We made this chart, in part, with the help of Raw Graphs.

Mississippi state pulled of a thriller last night. Probably the best game of the opening round. We tracked their bats and found them to be a Wilson umbrella team. Meaning, they used only Slugger and DeMarini bats. Huge fans of the Voodoo Insane and 519 Omaha. Here is their full lineup. 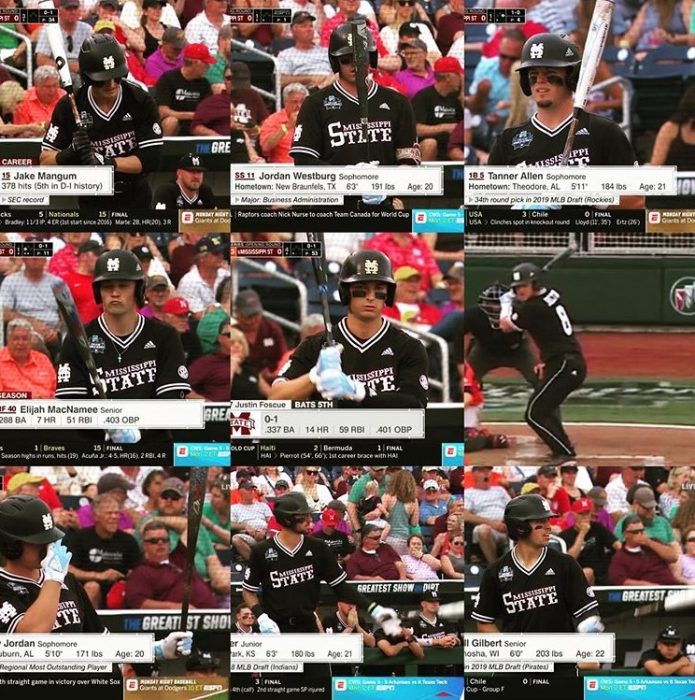 Auburn is a 100% Easton BBCOR bat school. And, turns out, most of them are in love with the 2019 Easton Beast X Loaded. Great, stiff and heavy swinging bat. No surprise that college guys love it. Here is the full starting lineup. 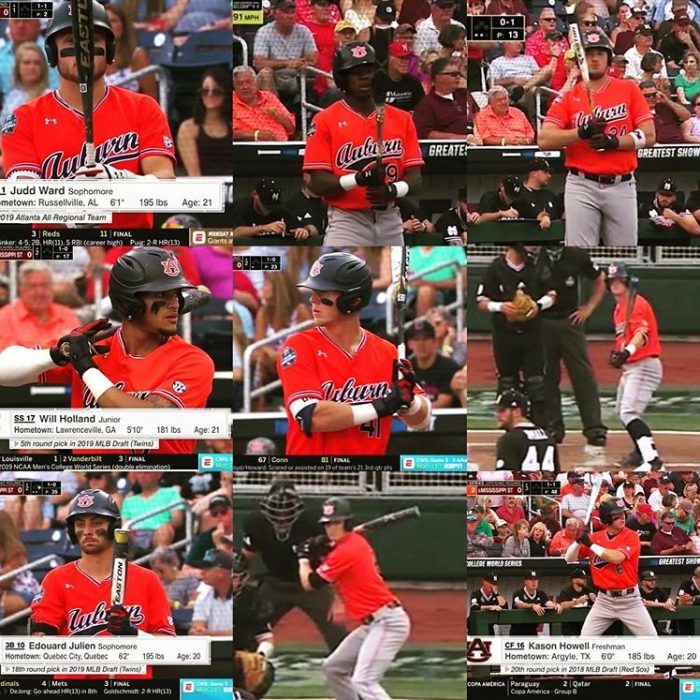 Louisville uses Louisville Slugger exclusively (as the should, hence the name). They are in love with the hybrid versions of the bat—only two swing single piece bats. All else swing some version of the Select series. From the 2015 715 up to the 2019 719. But, unlike their peers like FSU, none of them have the new 2020 PWR 7 Select.

In any event, here is the full starting lineup: 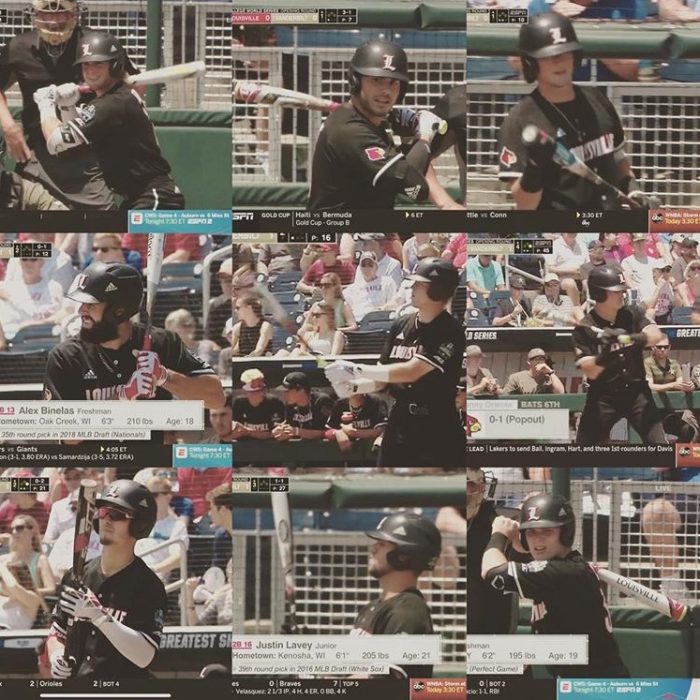 Here is their full lineup.

FSU is, like Texas Tech, Louisville Slugger heavy. Good lineup with a real focus on aluminum barrels. Fun, too, to see the 2020 Select PWR and 2020 Solo 6 in end of the lineup. Here’s the full list:

Arkansas looks Easton heavy. Real heavy. Also saw a couple of the new 2020 Easton bats in the 360 XL Fuze which will replace the Project 3 XL Fuze (which we also saw in the lineup. Here is the full list: 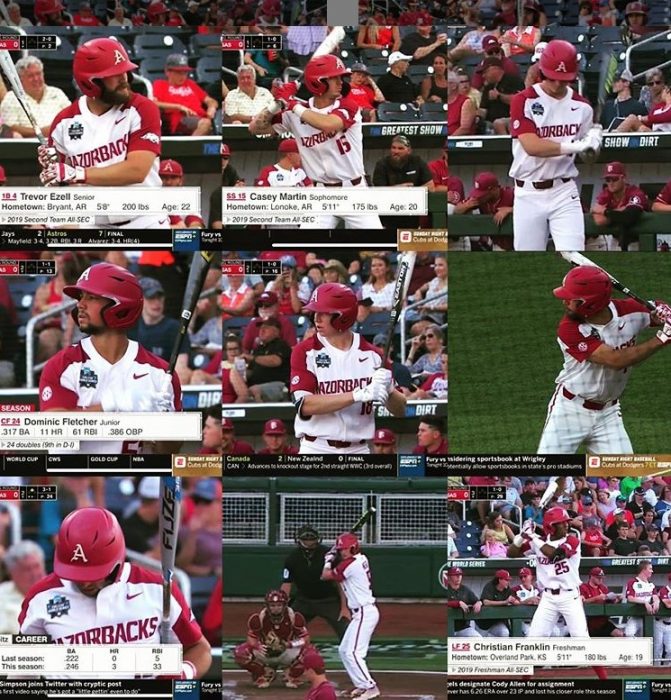 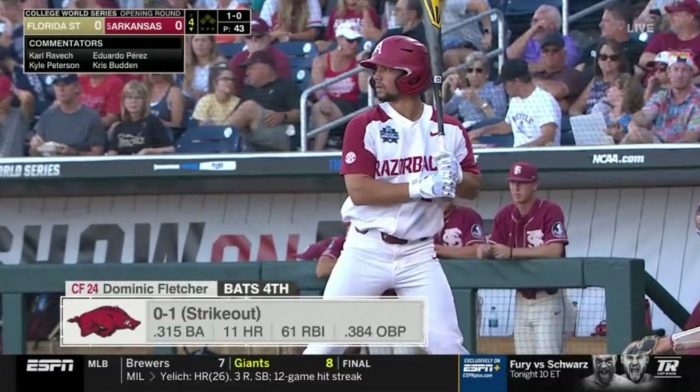 Well, we have a winner for day one. The oldest bat in the tournament is this 2014 Easton S1 from Fletcher—the 4th hitter in Arkansas’ lineup.

What a strange choice, honestly. But, the dude can rake so more power to him. And that thing looks way too new to be a real 6 year old bat. Likely he bought a dozen of these bad boys.

Michigan baseball is full on DeMarini. They use a bunch of the 2020 The Goods BBCOR bat. As well as plenty of DeMarini Voodoos. Looks like the 2020 Goods bat is a two piece composite they are using. (Rumor has it there will be a single piece in the mix too).

Texas Tech uses 3 different brands of bats. Our favorite of the bunch are the old School Marucci CAT 6 and the 715 Select from Slugger.

Here is there full lineup: 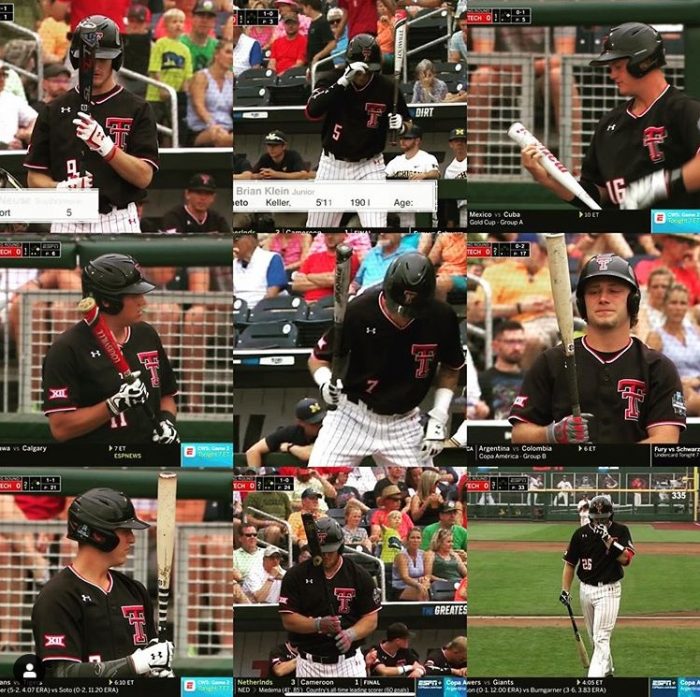 Best news so far, Michagan looks to be using a new DeMarini BBCOR bat for 2020 called “The Goods”. Rumor has it will be in a single piece and a two piece.

Haven’t confirmed if it will come in USSSA or USA, but BBCOR for sure.

Here’s a snap from Blake Nelson, the 3rd baseman for the Wolverines.

We are down to 8. After the Regional and Super Regional. Here are the teams: