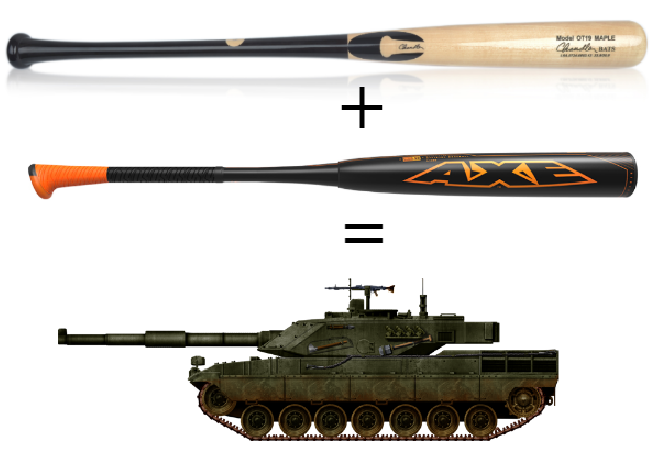 Axe Handle on a Chandler Bat

You can buy Axe Bats and Chandler Bats.

Although impressive we are by no means surprised. The use of an ergonomic handle on a bat is the final frontier for wood bats. They can’t be any lighter. We doubt there is any break through wood to change the game like Sam Bats did with Maple a couple decades ago. So, what else is there but an improvement in the knob? Don’t be surprised if Slugger finds its way on the knob of some very big time companies very soon. Not that Victus, Tucci and Chandler are not big time, but you know what we mean.

Here is a portion of their press release:

Chandler Bats, founded in 2010, built its reputation on the exceptional quality and craftsmanship of its products, and is widely regarded among Big Leaguers as the maker of the finest wood bats in the game. “Chandler checks all the boxes for what we look for in a licensing partner,” said Jay Helmick, senior vice president of Axe Bat. “They share our passion for making the world’s best bat, adhere to the highest standards of quality, and put the player first in everything they do. We’re honored and excited to add them as a licensee of our Axe Handle and are eager for players to swing the new Chandler Axe Handle bats this spring.”

Axe Bat has doubled its wood licensing partners this offseason in response to growing demand for the Axe Handle among pro players. This year, at least three dozen Big Leaguers swung an Axe Handle bat during the regular season, including All-Stars George Springer and Mookie Betts.

Chandler Bats is the fourth wood-bat maker to sign a licensing deal with Axe Bat.

“Since our first day, we’ve made it our goal to give players the best possible bat we can make,” said David Chandler, founder of Chandler Bats. “Partnering with Axe Bat helps us fulfill that mission by making available the very latest and best handle technology in the game. We’re excited to get started.”