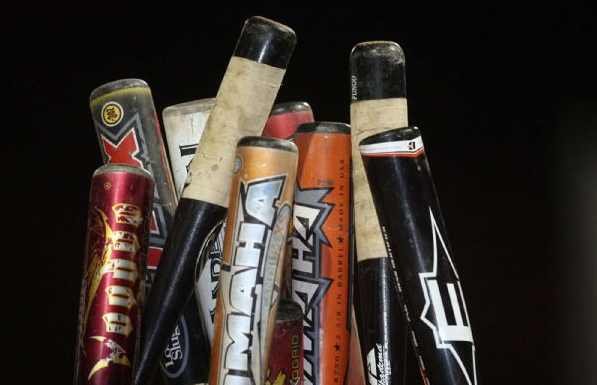 Did BBCOR Standards Ruin College Baseball? Will USA Baseball do the Same?

With the new changes in USA Baseball Bats starting in 2018, we were reminded of this article we wrote in 2015 discussing the difference that BBCOR bats made on the BESR approved college and high school baseball game. (BESR, you may recall, was the standard used in high school and college before BBCOR).

Akin to the repercussions some expected by the implementation of a BBCOR bat standard, many also claim USA Baseball’s change will hurt the youth game. It may be instructive to consider the changes the BBCOR standards had on college baseball when considering what possible changes the USA bat standard will have on youth ball.

Questions Yet to be Answered

Here is our original commentary on the statistical effects of BBCOR from 2015. 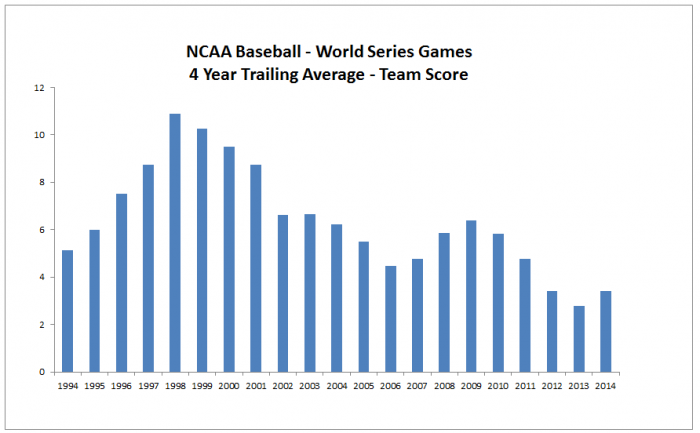 With the 2014 NCAA college world series starting this week, the baseball bat community must wonder if the new BBCOR bat standards have had any effect on college baseball offensive production. In 2011, NCAA baseball implemented standards on their baseball bats that controlled the composite and alloy materials ability to produce a trampoline effect on the ball–these regulations, referred to as BBCOR, produced a aluminum alloy or composite bat which mimics the trampoline effect in wood bats.

With three years of data behind us, we can be objective about the effect BBCOR has had by comparing the offensive statistics when BBCOR was in place and when it was not. If we can discern any changes in statistics in favor of defense since the introduction of BBCOR maybe we make some broad generalizations about the new standards.

Below is a ranked list of stats since 1975. Each year is ranked according to their offensive production. I’ve shown the data since BBCOR was introduced in 2011.

Since 1975, the last 3 years of college baseball have seen the three worst years in batting average, runs production, home runs and stolen bases.

Since 1975, the last 3 years of college baseball has seen the worst production in batting average (BA), runs scored per game, home runs per game (HR/G) and stolen bases per game (SB/G). Fielding percentage (FP), on the other hand, has never been better and ERA is just about as good as it’s ever been. However, pitchers are not striking batters out more or less than they ever have.

So are BBCOR standards ruining the game? If you like offensive production than you might answer yes. Pitchers don’t appear to be getting any better as they are not striking out batters more often–although their ERA is decreasing. And that ERA decrease can be explained by the increase in fielding percentage. Either we are experience an anomaly in amazing college defensive fielding or the baseballs are no longer being hit too hot to handle. The demarcation is so set along the BBCOR standard implementation fault line it leaves  no doubt: the BBCOR standards are destroying offensive production.

You may not be able to argue that the game of College baseball is being ruined by BBCOR standards (who doesn’t like the better chance at a no-no), but you can say that BBCOR standards have hurt offensive production more than any other rule change in the last 4 decades.

The data is a bit mixed. College pitching just isn’t as good as MLB pitching. College Fielding just isn’t as good as MLB fielding.  But while the defensive positions of pitching and fielding are better at the MLB level relative to their competition then college players, the MLB is much more of a defensive game even with the implementation of the BBCOR standards. If the goal is to create an NCAA baseball game more in line with the offensive and defensive production of the MLB then BBCOR standards have succeeded in that regard.

Bats were clearly getting over effective in the late 90’s and the NCAA had to do something. But the degree to which BBCOR regulations have effected college baseball appears to have been an overdose of regulation. Was there no middle ground?

In response to the NCAA BBCOR overreaction, the ball in the NCAA is changing to one with a less protruding seam. This flatter baseball, while not effecting initial bat exit speed, is projected to fly 20 feet further due to less drag effect in the air. It should also, at least in theory, negatively effect a pitchers ability to move pitches.  Balls with flatter seams may allow for both better contact and less resistance in flight. If the changes in baseball improve offense enough to recoup the disadvantages BBCOR created will be everyone’s question. A question the data, in about three years from now, should bear out pretty well.

When things got out of hand in the late 1990s and 2000s the NCAA had to do something: BBCOR may have gone too far.