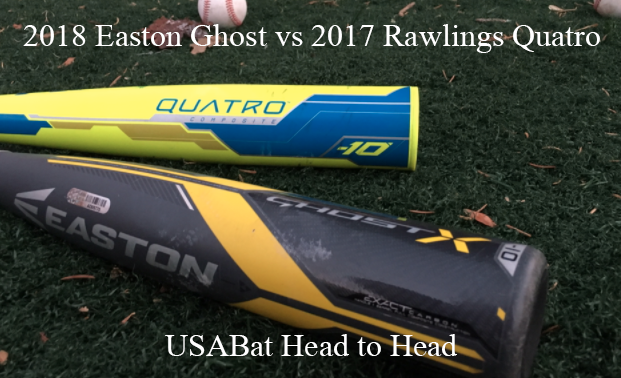 We used our Rapsodo exit velocities to get a feel for how the Easton Ghost X matches up compared to the Rawlings Quatro in the USABat versions. This comparison of the 31-inch drop 10 bats found a slight, but not significant, advantage to the Ghost X. Below we explain several caveats to the data, as well as the overall data charts we developed within the Rapsodo software to create legitimate scatter charts.

Also, you may want to read our barrel size comparisons on the Ghost and Quatro. You can find all those bat barrel size rankings here.

We set up our 2018 Easton Ghost X vs Rawlings Quatro test data in an outdoor batting cage. The pitching machine sat 50 feet away from the plate and we used practice balls thrown at 55 miles per hour out of the machine. We rotated between each bat with the same hitter after 5 solid hits until we reached 30 hits from each bat.

We hesitate posting exit speed data because they are so easily MISINTERPRETED. If we are going to pretend to be data scientists, let us first start with an honest assessment of what the data is telling us—not sweeping indictments of what it is not.

The max exit speed on the Ghost X for our particular hitter, ball type and pitch speed was 67.0 mph. The max exit speed on the Rawlings Quatro for our particular hitter, ball type and pitch speed was 66.2 mph.

The longest shot on the Ghost X Was 208 feet as measured by the Rapsodo hitting device.

The longest shot on the Rawlings Quatro was 209 feet.

The conclusions we can make from this analysis of the 2018 Easton Ghost X vs Rawlings Quatro are straight forward. The two bats perform, for this hitter with this size bat in these circumstances, very close to identically, with a slight edge to the Ghost in terms of total ball exit speed. Whether the data here is significant is beyond our ability to tell without knowing how accurate the Rapsodo device is.

We think the hitter’s commentary in the video—that they preferred the feel of the Ghost a slight bit better on mishits—is also useful. But, in the end, that is simply subjective data.

In the end, we cannot conclude anything but that the bats are similar. We like how the Ghost has a bigger barrel and comes in more sizes than the Quatro. We also like the feel on mishits a little better. Add in the fact that it did improve upon exit speed—although likely not a significant amount—and we at least have a feel for which way to go. But your money is not ours and we’ll leave that decision up to you.

We fully expect the USABat versions of the Ghost and Quatro to compete head to head for the best spot in the USABat realm. It would not be fair to make sweeping generalizations about the different lengths of Ghost X and Quatro USAbat bats. That is, does the 32 inch Ghost X match up similarly to the Quatro in a 32 inch? We would hope the 31-inch is indicative of the others’ performances, but we just won’t know for sure until we have captured the data.

We can say virtually nothing in comparison of this bat battle when compared to the BBCOR versions of the same brand. That is, how does the BBCOR Rawlings Quatro compare to the BBCOR Easton Ghost X? This comparison sheds no light on that question.

As with the BBCOR versions of this bat, there is virtually nothing we can say about how this data translates to the Big Barrel versions of this Quatro and Ghost X. Until we gather the data, you’ll simply be left to gain some insight from our reviews and barrel sizes.