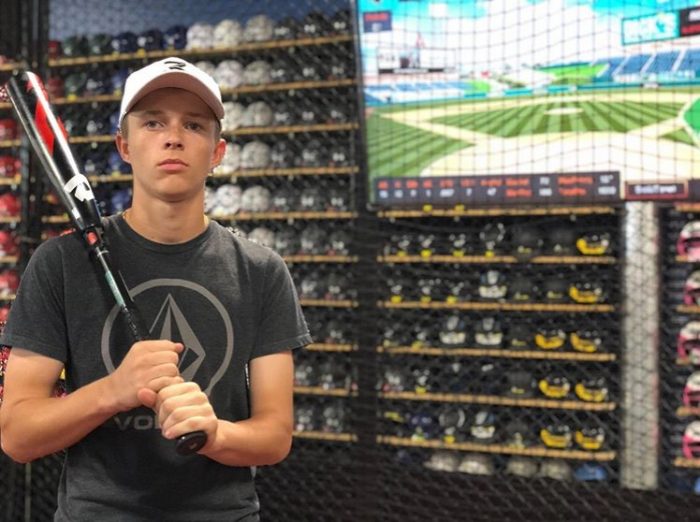 Looking for a HitTrax Batting Cage near you?

We spent time in the Dick’s Sporting Goods (Henderson, Nevada location) with their HitTrax setup to do some bat fitting and a home run derby.

Here’s what we learned.

4 Things to Notice for Bat Fitting in a HitTrax Cage

We’ve hit with every baseball and fastpitch bat since 2014. Over those years, we’ve learned a bit about what you can and cannot tell from a bat in cage off a tee.

Here are the four things you should pay attention to as you take the bat in a DSG cage with HitTrax.

Although you can’t measure the swing weight while standing in a store, you can at least get a feel for the bat’s weight. At the Dick’s Sporting Goods HitTrax cage, you should feel the difference when you swing the same model bat in different sizes. Of all the things you can learn at The Cages, this might be the most important. It is one thing to stand in a sporting good aisle and hold the bat. It is quite another to actually swing it at a ball.

Don’t assume that all bats’ sizes are created equal. If you want to understand more about the differences between swing weight, scale weight and stated weight, then read this.

Another considerable factor you can gain insight into from swinging a bat in a HitTrax cage is how the handle feels in your hands. Notice the taper of the bat’s knob. Notice, too, the thickness or softness of the bat’s grip. These are noticeably different between bats and could make all the difference in your preference towards one bat or another.
If HitTrax did nothing but show us launch angle, it would be worth it. Launch angle is an essential factor in determining success at the plate. Although the foam balls might not fly like normal baseballs, the launch angle doesn’t lie. When all the data is assessed, between similar results, we’d choose the bat that gave us the better launch angle in a HitTrax batting cage.
Exit velocity is another aspect we think is significantly useful when choosing one bat over another. Note, however, that any average with less than thirty hits is NOT adequate to measure actual exit speeds. In other words, we would take the two bats you are considering and swing them no fewer than thirty times in a HitTrax cage. Then, note your average exit velocity. All other things being equal (including swing weight), we’d prefer a bat with higher exit speed over lower exit speeds.

That said, do note that a bat with a heavier swing weight WILL give you a higher exit speed. That assumes, of course, that you can swing it just as fast. Our experience with tee work is that it overestimates your ability to get the bat on the ball for heavier bats. This is why we prefer launch angle over exit speed when doing tee work.

In any event, exit velocity can be, and should be, considered when using a HitTrax batting cage at a Dicks Sporting Goods. (Even if the balls are foam).

Where DSG’s HitTrax batting cages shine are in their bat selection. In the DSG we visited in Las Vegas, there were about forty different bats (including fastpitch) available for trying. According to the person manning The Cages booth, they were willing to use a floor model if they had it available and it wasn’t available in The Cages. Based on what they had in stock, we pretty much had the pick of the litter in terms of our bat and bat sizing.

In other words, if you don’t see the bat you really want to try in the cage, don’t be ashamed to find out if they have a floor model you might be able to swing.

On our visit, we saw:

Although the exact number is not known, about 50% of performance baseball bats are bought online. Considering that most of those bats are bought without the player ever holding that model in their hands, and that they can come with price tags hovering around $500, the fact that even one out of two bats are bought online is remarkable. In many ways, and we’ve been there, we spend our money online for a bat and then hold our breath—hoping the bat is the right size, right power, right weight balance, right performance, right league and right grip.

You can imagine the need for as much information as possible when buying a bat. Hence this site, which attempts to give real player and real parent advice about what bat to buy, mostly online. And hence, DSG HitTrax batting cages, another piece in the information puzzle, giving the opportunity to pick from the bats you’ve narrowed it down to after reading our reviews.

HitTrax Batting Cage Near You

We appreciate Dick’s Sporting Goods’ effort to improve the baseball bat experience at their brick and mortar stores. They also do a considerable amount of business online too.

DSG’s addition of HitTrax and bat fitting to their brick and mortar stores might be the most significant stride in the in-person bat experience we have observed. At the time of this writing, about 150 Dick’s Sporting Goods use a HitTrax Batting cage. (See all their locations here).

We spent about an hour in and around The Cages at DSG in Vegas and here are just a few of things we learned. You could learn them too.

We showed up on a Friday just before noon and it was wide open. During our time there (we spent about an hour goofing around with it), only one other group came by, and they were there for less than 10 minutes. We have built up some BP stamina so could have gone longer.

There are other batting cages around the country that use the HitTrax system. But, even directly on the HitTrax site, we couldn’t find a list. Dick’s Sporting Goods’ list is here.

Our experience with the HitTrax readings matched up very well with the exit speeds we generated in our testing. In other words, we think the readings were accurate and matched up well with the different bats we were using. In that sense, The Cages are highly useful and provide an experience that most can’t find anywhere else.

We posted a couple of DSG and The Cages images on our Instagram feed. Immediately, a number of folks responded saying they didn’t like the foam balls used in The Cages at Dick’s Sporting Goods. In some sense we agree—it does lose a bit of its luster when comparing expensive bats, to hit a foam ball and not a real leather baseball or softball. It is also harder to tell how a bat feels on a mishit with a foam ball over a leather one.

That said, we could tell when we mishit a ball. Granted, it didn’t hurt our hands like a real baseball would off an actual pitch, but most hitters can tell just fine when they don’t square up a ball. We didn’t need real baseballs for that. Also, we saw real average launch angles and exit speeds with the foam balls–which we think are one of the most significant variables when doing tee work.

All that said, we’d rather see real balls than foam ones IF we were there to hit. (If we were there to buy a glove or just wander the store we would rather not be bombarded by the overwhelming ping of the Rawlings Velo 🙂 ). And, since we’re making a wish list, we’d rather see live pitching over tee work. (And if we had to choose just one, we’d take live/machine pitching). But, you can’t beat the price (free), location (for most people) or bat selection.

Are there some batting cages in your neighborhood that have a HitTrax and a full on batting cage with every bat, size and model for you to try?

If so, then count yourself one of the lucky ones. Most of us are stuck building our own in the backyard or traveling hours to a busy and expensive batting cage for a selection of bats we had to bring.

If you are in the retail space you know that square footage is EVERYTHING. Brick and mortar stores dedicate areas of their store to what they care the most about.

The addition of a nearly 200 additional square feet dedicated to bats is a stamp of their sign of seriousness. They are serious about being the one stop shop for fitting baseball and softball bats.

Other bat stores, usually one offs in bigger cities, often have the batting cage/HitTrax luxury. But, if any store is going to get personalized exit speed and launch angles into the hands of the players in cities across America, our bet is its Dick’s Sporting Goods.