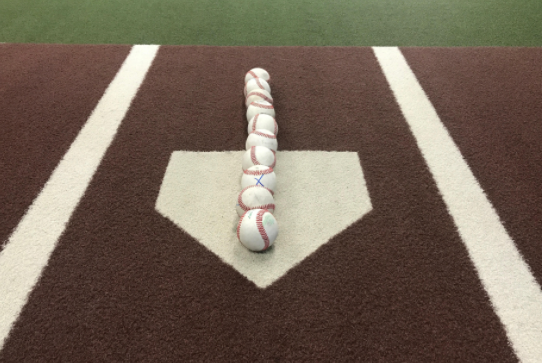 As I look back on my playing career, I realize that I was EXTREMELY lucky to be born into a baseball family where I was taught at an early age the proper fundamentals of the game—especially hitting. In this article, I will break down the three basic parts of the swing that generate power and consistency plus I will detail the reason for this mindset that has helped countless MLB hitters become stars especially Aaron Judge & Mike Trout. It’s time to learn about the three “Get’s” in hitting. 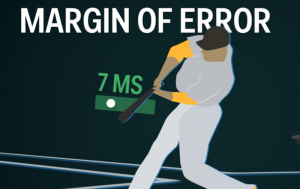 Why You Want To Hit Harder

Before we dive into the mechanics, let’s understand the most important question in baseball training—Why? Why is this information relevant to hitting the ball harder and with more consistently?

The basis for the information stems from one thing and one thing only—keeping the barrel of the bat in the path of the pitch for as long as possible. Great Major League hitters have learned to keep their barrel in the zone for 7 milliseconds. That’s like 30-36 inches!

See all our baseball bats.

When I start working with a new hitter the first thing I do is explain this concept. I do this by lining up 10 baseballs (15+) or 8 baseballs (14 and under) on the ground and have the player stand behind them. Then I stand up as a batter and show them that with the proper bat path, I can hit all 10 baseballs on that line, all on the barrel, with the SAME swing! This is often a revelation for young hitters. I show them how their early casting of the hands around the outside of the ball, or pulling their front shoulder, or stepping in the bucket causes them to only be able to handle a fraction of the baseballs in the line.

The line of baseballs demonstrates that a hitter can be late, on time or early and still barrel the ball up. Hitting the ball on the barrel is the ONLY goal hitters should focus on.

Once the young player understands the goal of the training, it’s onto “How” to get the bat on the path consistently thereby creating more consistency hitting the ball hard.

Part 1: Get Behind the Ball 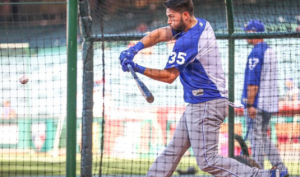 Part one of hitting the ball harder is learning how to get behind the ball. Too many young hitters step in the bucket from fear of getting hit. By doing this they take their energy away from the flight of the ball. Other issues with getting behind the ball stem from pulling out the front shoulder, pulling the head, drifting forward with the head, trying to pull the ball, over striding and not rotating the back leg.The proper way of getting behind the ball as it enters the swing zone is universal. All good hitters do this but from many different stances.

Here is the MUST DO list for getting behind the ball:

Part 2: Get Inside the Ball 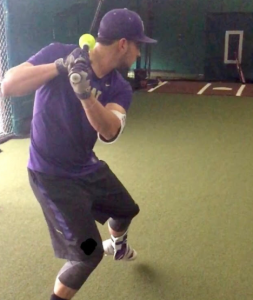 Check out our review on the Pro Glider Trainer.

One of the players I train is an Ivy League commit. When he first came to train with me I saw a good swing with great athleticism so I asked him bluntly, “Why are you here? Your swing looks pretty good.” The player then confessed that he was starting at catcher, but was being DH’d for. He said he was very inconsistent and constantly rolling over the ball hitting grounders to the shortstop and third baseman.

As we began the lesson and I shared with him the notion of hitting the line of 10 baseballs, a light went off in this bright young hitters head. He understood immediately that by attacking the “outside” of the ball he was greatly limiting his bat’s time in the path of the pitch. So we went to work.

Soon, this player was completely obsessed with getting inside the ball and using the middle of the field. He got a ProGlider Training Bat and focused on getting his hands inside the pitch he was envisioning as he practiced. He then used tee work to further develop his new muscle memory by slotting his back elbow into his ribs driving his hands forward but he went one step further. He ONLY saw the inside of the ball and focused on using the middle of the field between left-center and right-center.

Soon, he was hitting 7th in the line-up and crushing the ball to the middle of the field. As his average began to climb, he was moved higher in the batting order and by the end of the season he had raised his average one hundred points.

He kept it rolling in the summer and was named All-Tourney as his team won the American Legion World Series.

All of this success came rapidly for this player simply by focusing on getting behind the ball, getting inside the ball and finally grasping the concept of the third part of the swing—getting THROUGH the ball.

Part 3: Get Through the Ball 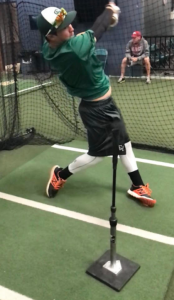 Once a hitter learns how to get behind the ball and then to get inside the ball, the swing is still not over. The third and very important part of the swing is getting THROUGH the ball.

Let’s go back to the 10 baseballs in a line and the 7 milliseconds. When a batter is behind the ball and inside the ball, it’s time to drive through the ball. This is done by continuing to throw the hands with the back elbow slotted into the ribs, through the inside of the ball, finishing high around the earhole of the helmet that faces the pitcher. This short to the inside of the ball bat path gets the barrel where is needs to be. This move resembles the Nike “Swoosh” and I often use that logo as a reminder for hitters to follow. The swing is a short movement down to get inside the ball, then a LOOOOONG pass of the barrel along the path of the ball…like the “Swoosh”. 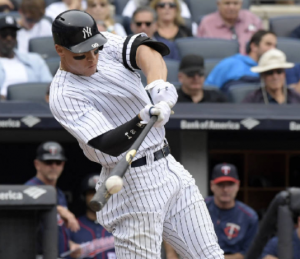 Earlier I mentioned Aaron Judge. He has the benefit of great hitting coaches with the Yankees who tweaked his swing to follow these three laws of hitting. Being as big and strong as he is, he can be late on the line of the 10 baseballs but since he gets through the inside of the ball so well, he hits 420 foot fly balls to right into the upper deck! He was not this way in college or early in his pro career, he learned these three traits and worked to master them.

Another young hitter that really gets behind, inside and through the ball is Mike Trout. The reason he hits for average and power is how long his barrel is in the bat path.

In a recent Spring Training game, he hit a low and in fastball over the batter’s eye in center field that was 420 feet away. That swing was perfect. His load put him behind the pitch, he rotated his back knee while getting his hands inside the ball, and he got through the pitch connecting with it in FRONT of his front foot. By not trying to pull that pitch, the trajectory of the ball upon contact put that ball into orbit!

It’s All About Quality At Bats! 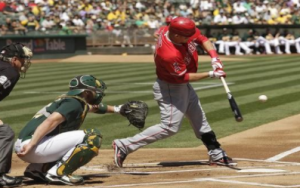 Hitting a round ball with a round bat is the toughest thing in all of sports. Fail 70% of the time and you are an All-Star! The best hitters learn how to have effective at bats 60% of the time. I like my old teammate, Steve Springer’s, “Quality AB’s” theory. If you forget about batting average and focus on “Quality AB’s” you’ll be a better contributor to your team.

A “Quality AB” is defined as:

Getting behind, inside and through the ball will help you hit the ball harder and more often. The three “Gets” will also get you to 60% “Quality AB’s”. Soon you’ll be on your way to greater success and with hard work, you’ll become the absolute best hitter you can be.

How To Steal Signs and Protect Yours »