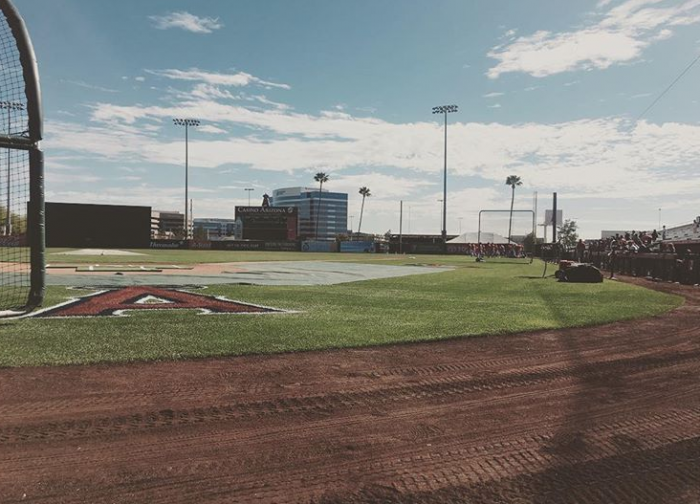 A magical time begins every February when the pitchers and catchers report to Spring Training. As fans, we feel the warmth of a new season as the frost from the long, cold winter begins to thaw. But for the players, it’s often a time filled with uncertainty and a real concern that this may be the last time they step onto a professional baseball field.

For every Kris Bryant or Mike Trout with guaranteed contracts whose main job in Spring Training is to get ready for Opening Day, there are hundreds of players hoping to even MAKE it to Opening Day. Often times it’s a very complicated situation with contracts, options and tenure making some players more or less appealing to the front office.

See how to decide the right bats to choose for your spring training bags.
See our conversation on the best BBCOR bats. 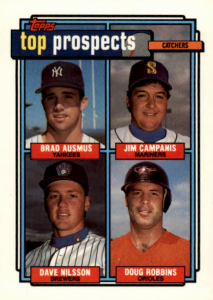 As a catcher, I reported to Big League Camp in late February and spent the first week catching dozens of bullpens. My legs would be so sore driving home after the first day I had to use the cruise control whenever possible! Then in the morning, it was hell getting out of bed while it was still dark outside to do the whole thing over again. My glove hand also took a POUNDING during the bullpens. I remember catching Randy Johnson with a brand new glove—and he broke it in with one bullpen! His ball was SO heavy that my new, stiff catcher’s glove sounded like a firecracker going off when he pitched.

After the bullpens were over, we also helped the pitchers with “Pitchers Fielding Practice” or “PFP’s”. These drills are to get the pitchers ready for come backers, covering first on balls hit to the right side, double play come backers and bunts to 2nd and 3rd bases. Catchers would be stationed at the bases to assist the pitchers for this time consuming drill. After all of that, it was time for the catchers to hit.

I remember one year my hands were so blistered from hitting I had to get creative to heal them up quickly! I tried all of the common remedies like medications and pickle juice but someone told me about a way that works really well, although it’s kind of gross. My girlfriend (who’s now my wife) had a little Jack Russell Terrier named Barney. One of the trainers told me that dog saliva is very good at healing wounds so out of desperation I poured gravy on my blistered hands and called Barney for over a little healing session. Barney licked all that gravy off my hands and by the next day, the blisters were considerably better! It was AMAZING! 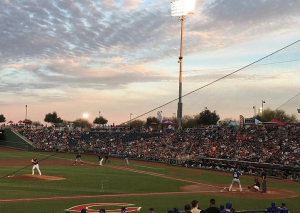 As camp moved into week #2, the position players would arrive and everything ramped up. Now there were like 50 or so players at Big League Camp. We would stretch and do agility work the first hour of the day. Then we would break out to different defensive groups and pitchers assigned to throw bullpens would begin. As the low man on the catchers totem pole, I would be assigned catch the bulk of the bullpens but I loved it! I was catching MLB All-Star pitchers with the nastiest stuff I’d ever caught. It really helped me grow as a receiver and I was given compliments by these big leaguers. That was a great feeling for sure!

During week #2, we also broke off into hitting groups. These hitting groups rotated between the cages, tee work and batting practice on the field. Then we would have simulated games.

As I mentioned, I caught Randy Johnson in the bullpen but that was super easy. However, when the batters stepped up to the plate during the simulated game, RJ also stepped up his focus. He was now throwing close to his game speed and the movement of his fastball was completely different. It would sink, rise, cut or stay straight—it was a NIGHTMARE to catch him. I hit off him during one of these simulated games and walked away thinking I’d rather hit off him than catch him!

As we entered week #3, the games began. I was at every game seated next to the relief pitchers in the bullpen. It was quite different for me as I was used to starting in the minors but now I was the 4th or 5th catcher on the team. This was a bit frustrating but I knew I had to keep grinding and eventually I may get a shot to play.

As the games began in week #3 our schedules started to become more consistent. A typical home game during weeks three and four went like this.

As week #4 ended on a Friday, that’s when the herd started to thin out. The first round of cuts hit the clubhouse. Some players were given their outright release while others were reassigned to a minor league team and reported to Minor League camp.

I usually made it past week #4 primarily because they still needed catchers for bullpens. 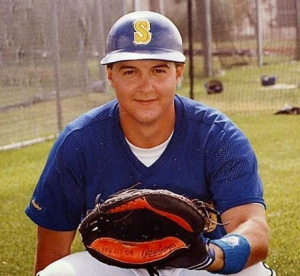 My first Spring Training in 1989, I had been patiently waiting my turn to play when I finally got the call. The bullpen phone rang and Manager, Jim Lefebvre, told the Bullpen Coach to tell me to get my gear and get into the dugout—I was going in!

We were playing the Padres and I remember this moment like it was yesterday. The lead-off hitter that inning was none other than Tony Gwynn!

Tony stepped into the box and greeted me with eye contact and nod. I was thinking to myself, “Dude! That is Tony Gwynn and you are about to call a pitch to get him out!” I didn’t feel star struck and didn’t doubt my ability, but definitely felt much more anxious than normal.

I put down a sign for a fastball away and as the pitch was in the air, I knew it was a bit up and too much over the middle of the plate—and Gwynn crushed it left center. Griffey was in centerfield but he had to make a long run to get the ball that had settled on the warning track. By then Gwynn was at third with a stand up triple.

Next up was John Kruk. And he started talking to me like he had known me for years—but he kept calling me “Catch”. He was TOTALLY babbling while I was giving the sign to the pitchers and kept saying, “What are calling Catch? You know I’m driving in this run no matter what!” The umpire was laughing and told me to ignore him.

So I called a fastball away and Kruk fouled it straight back, just missing it. And he turned up the babble saying, “Hey Catch, that’s all your guys got? What are you calling now? Doesn’t matter…I’m driving in this run.”

So I called a change up to Kruk on this 0-1 count. He didn’t hit it too well, just a little fly ball to left field but then I realized…I hadn’t even caught a pitch in my first Big League Camp game against two All-Star hitters and now there was going to be a play at the plate with freaking Tony Gwynn!

The left fielder got under the fly ball and as he caught it, Gwynn tagged up and was bearing down on home plate. As the throw came, it took me up the first base line just a bit but Gwynn didn’t slide, he ran through standing up meaning he would have likely plowed me if the throw was on line!

As week #5 came to an end that was usually when I was sent down to the minors where I reported to my team for that summer.

Spring Training today is about the same. This month there are close to 200 players at every camp trying to get one of the 125 jobs from Extended Spring to the Major Leagues within that organization.

As week #6 begins, the cuts on that Friday were staggering. Most fans may not be aware of how this works. It’s pretty brutal. You’ve been working your whole life to play professional baseball and whether you’ve played professionally for 20 years or 20 days, when the organization has decided “to take a different direction” you only realize you’ve been released by walking into the clubhouse to find all your personal belongings in a black plastic trash bag with a note saying, “Please go upstairs to speak with Mr So and So”. Guys would start screaming, crying uncontrollably or some would silently sit down and go into shock.

Baseball is a tough game. If you fail 70% of the time, you are considered elite but fail 80% of the time and you will not be around very long.

Soon there will be a number of 18 to 35ish year old baseball players out of a job. Many will try independent ball or try to get on a roster in Asia, Europe or Australia while others will still be in shock realizing that their dream is over and they need to figure out the next step in a life where they’ve always identified themselves as baseball players.

I went through this in my 8th year as pro player. I called a story I wrote in my book, “Born Into Baseball”, as “Transitioning to ‘Real Life’”. That was the toughest thing I’ve ever had to do in my life. But a funny thing happened—I learned quickly that the work ethic I learned as a baseball player was much more intense than most people in “Real Life” and that helped to set me apart as I began a new career in advertising/marketing/promotions…but I still longed for the days as a baseball player.

All players reach a point where they are no longer a fit for their team and no other teams want their services either…it’s time to move on. Many suffer from bitterness, depression and awkwardness in “Real Life” and it feels like you’ve lost a loved one.

I’ve come to the understanding that these feelings of loss are real.

After being released from baseball, I realized I really missed that guy who couldn’t wait to get to the ball park with his stylish mullet, hang out with his teammates, hit bombs in batting practice, get his name announced with his walk up song bumping, crush one off the wall to drive in a run, throw out a runner, grab some beers with his teammates after the game and talk about doing it again the next day. That guy died the day they ripped the uniform off my body for good. It took quite a while to come to grips with this reality, just like when losing a good friend or family member—there is definitely a period of mourning.

Keep this in mind when you look at the transactions as Spring Training ends. A little blip on the transaction wire saying something like, “Seattle Mariners release catcher Jim Campanis”, is absolutely devastating to that player. But since the dawn of time–no player is greater than the great game of baseball. PLAY BALL!