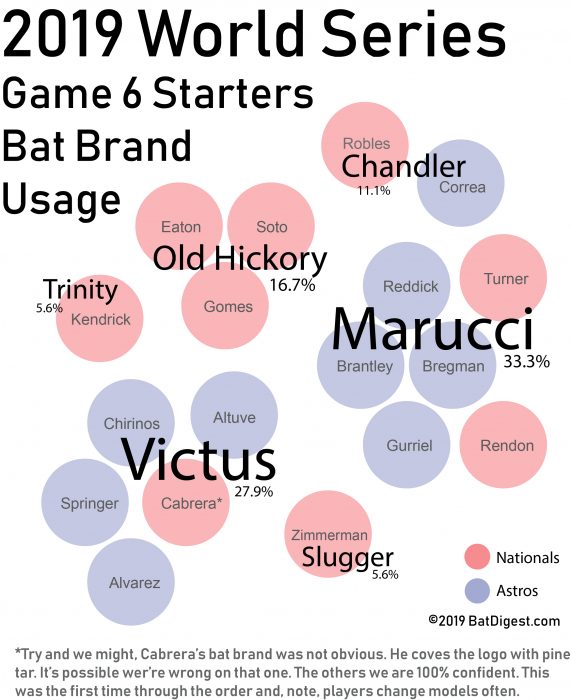 What Kind of Bats Do MLB Baseball Players Use?

What Kind of Bats do MLB Baseball Players Use?

In short, wood. MLB Players use wood bats made mainly from Maple. In years past Ash was more popular. But, today, over 95% of MLB Baseball players use maple wood bats.

Here is what we cover:

We spent a week in the month of June of 2019, watching all 255 starting MLB players on MLB TV. We tracked what brand each Major League Baseball player used, their spot in the order and position that day. We put that information into a few charts.

What Bats do MLB Players Use

You can jump to the National League or American League break down.

Here are the exact numbers we tracked while watching each games starting lineup.

We tracked the bats in game 6 of the Nationals vs Astros 2019 World series. Here’s what we found, atleast the players first time through the order.

We tried real hard to see Cabrera’s bat model. He puts pine tar on the top of the label in a major way. That said, we know it is not Old Hickory or Slugger. Our best look, found in his promo video, he had what appeared to be a Victus logo branded bat.

Sure, some players keep their bat for the lives. Guys like Derek Jeter and Mike Trout have, basically, swung the same bat their entire careers. We don’t meant he exact same bat, we mean the same model and brand.

But, most MLB players change their bat type at least often enough to make charts like the one above outdated as soon as it is printed. In fact, we saw a couple players change bats during their at bat. (In both cases the player broke their bat on a swing and got a different brand from the dugout).

Another thing which affects the MLB bat market share is that lineups change daily. Guys take a day off, get sick, get moved from DH to LF and back again and then a team plays a National League game where he sits the bench.

We tracked the bat usage rates over the course of a week—watching every team at least once. But, still, we missed a few guys who were sick, out or taking the day off. Andrew McCutchen, for example, isn’t in our data set but a huge Marucci guy. Springer also didn’t play the days we watched the Astros. Carlos Correa also wasn’t playing.

In any event, we did get the 255 non pitching players we saw in the starting lineup of June 17, 2019. You can see the full list at the bottom of this article.

We could, if we wanted to be disingenuous with the data, extrapolate out what bat we saw the players with in this at bat and then assume their annual stats are connected to the brand.

Then, with some excitement, we could publish a piece saying which bat has the best batting average, HR, etc.

But, in truth, hitters change their bat so often we’d need to watch EVERY single at bat. Considering it took us a legit 80 hours to find, manage and identify the bat logos on 255 at bats the task to measure the ACTUAL batting average of every bat brand at the MLB level would be all but impossible. Each player with 400+ at bats multiplied by 255 different starters each week would make it a full time job for a room full of people who could identify bat logos.

In other words, the idea of publishing bat brand data based on how well the hitter performs with them is psuedo-science. It isn’t honest research.

We also broke down Major League Bat usage by league. We didn’t find any obvious differences between American and National League baseball bat choices. Both seem relatively random. Marucci does dominate the Natoinal league more so than the American League. More than half the 3rd baseman in the National League use a Marucci.

Slugger also does very well in the National League and comes in at a solid 2nd place. (Overall they are 3rd as Victus outpaces them in the American league enough to win 2nd). But, for whatever reason, center fielders love Slugger.

There are only 120 in the National League (unlike the 135 in the American League) because we did not track the pitchers.

There is plenty of randomness in the bat choices of MLB players. Compared to the NCAA market which tends to domination by bat contracts for different schools. Some teams, like the Angels, swing 8 different brands from their 9 different players. The only two swinging the same are Old Hickory fans (Mike Trout, Justin Bour). In fact, we can’t find any team that swings less than 4 different brands.

We aren’t exactly sure what to make of this. Are bat reps that competitive in every clubhouse? Or, are patterns and relationships made at an early part of their career and players stick with what they know?

In any event, the American League bat sun chart looks like this. There are 135 hitters here and, as you can see from the chart, we counted the starting designated hitter for each team.

Another way to see what bats MLB players use is to watch every at bat for the MLB All Star Game. Of course, we did that too. We found Marucci to dominate. Victus was a legit second. Slugger and Old Hickory followed up nicely.

We also saw a few unique ones like an SSK and Tucci.

Do note, we did not document all the non starters—and there are plenty of PH/Subs in the all-star game.

Here is our specific data set we gathered while watching the 255+ at bats.

As often happens, some players played in different positions for any number of reasons and many players used a bat they might not use that often.