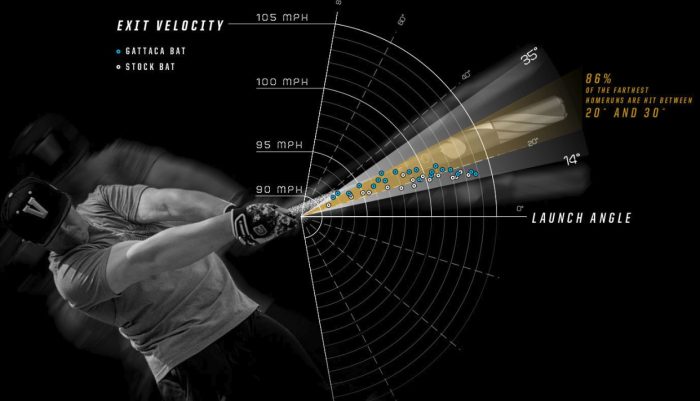 Looking to buy your first serious baseball or softball bat?

You’ve come to the right place.

(Take our what bat you should get quiz)

Over the years we’ve bought hundreds of bats. We’ve also coached several into their first serious bat buy and recommended bats to millions more. Here is our beginners guide to buying your first performance softball or baseball bats.

Here is what you’ll learn

If you know virtually nothing about bats then you should begin your plight by understanding that different leagues require different bat certifications. Even within the same sport (Baseball, Slowpitch, Fastpitch) there are multiple certifications.

Fastpitch has two major certifications: ASA and USSSA. ASA is required for high school fastpitch while USSSA is used for some competitive leagues and, often, mens’ fastpitch.

In any event, it is IMPERATIVE you understand what league you are playing in as to buy the right bat.

Once you’ve found your certification, undoubtedly, you’ll notice bats’ price ranges are remarkably wide. Brand new bats can be as cheap as $50 or up to $500. This price disparity, with very little explanation from vendors as to why, will be the most infuriating thing you’ll find the space. How could one bat be priced at nearly 10 times the amount of another if all it is to do is to hit baseballs?

That is the exact right question and, in large measure, the genesis of batdigest.com.

In short, you generally get what you pay for. But, there are enough duds the industry has hyped by vendors and manufacturers that you should be weary sales pitches and marketing videos.

Over the years we have tested thousands of bats by measuring exit speeds and swing weights. There are two things we know for certain.

How much should you spend?

Consider: (1) How many games you’ll play with the bat. Spending more than $10 per game feels exorbitant. (2) How many years you will use the bat—are you growing out of the bat soon? (3) What is your budget today. Realize too, if you start taking this sport serious, you will spend more on bats in your life then you ever thought possible.

Generally, very elite players can make nearly any bat work well for them. Younger and new players and growing players tend to benefit from better bats more than older and more experienced players.

Where to Buy a Bat

Every year there are more online places to buy bats. We have had decent success with just about any of them. Just Bats it the largest online specific retailer. They are followed by places like Baseball Express and Closeoutbats. (You can see our full list of online bat vendors here). In terms of overall volume then Dicks Sporting Goods is the beheamouth in the space—but plenty of their business is brick and mortar.

Without surprise, Amazon’s bat section has a serious bat offering. Because of its multiple vendor model (many of the big vendors have an Amazon store) you can find just about everything on there.

Deals, like everywhere online, will need to be sought after and shopped for. We keep up with a few great deal articles but they are often out of date really fast.

In terms of selection and pricing you just won’t beat the online model. If you really want to touch and feel the bat before you pull the trigger then you’ll need to find an outlet that carries them. Dicks Sporting Goods is a good place to start but rarely do they have all the sizes and models you need.

Bat barrels are made of aluminum or composite. After you’ve made a decision on your price and league the barrel type comes as a next useful consideration.

Composite is a generic term that is, by some measures, a modified plastic that maintains certain characteristics. Aluminum is a metal. Not every company’s aluminum and composite material are the same. Bat manufacturers add certain things to aluminum to make an aluminum alloy and composites can be crafted in all sorts of ways. (See our conversation on Aluminum vs Composite bats).

But, of course, each of those broad categorizations by material have many exceptions.

What Should You Start With: Aluminum or Composite?

In terms of overall performance most of the ‘best’ youth baseball, fastpitch and slowpitch bats tend to be composite barrels.

High school and college baseball bats, via the BBCOR standard, tend to favor neither aluminum or composite in terms of performance. In the BBCOR space, smaller and younger hitters tend towards composite for its lighter swing, smoother feel and bigger barrel whereas bigger and more advanced hitters like the stiff feel and hot out of the wrapper performance of aluminum.

The other important point is that aluminum bats do not require a work in period. Composite bats, depending on who you ask, often require a 200 to 1000 hit minimum until they’ve reached their maximum pop.

Highschool players should, generally, care more about feel on contact then barrel material. See the two piece or one piece conversation below.

Fastpitch and Slowpitch players don’t have many serious options in the non-composite space. We do think there are a few great cold weather option bats out there in the fastpitch space that need an aluminum barrel.

One Piece vs Two Piece

Another useful consideration you need to note is the one piece or two piece design. Most serious fastpitch and slowpitch bats are constructed of two pieces. That is, the barrel and handle are made seperatley and then combined together at the end of production. It is very rare (in softball) to see a serious player using a single piece bat.

In baseball, however, the one piece vs two piece bat is a serious consideration—some would argue the most important.

Baseball players, here are your options:

The Point of a Two Piece Bat

Generally, a two piece bat carries with it two benefits.

The Point of a Single Piece Bat

Single piece bats have the distinct advantage of being stiff. This stiffness lends to more power transferred from the swing to the ball. This is why bigger hitters, especially those in the NCAA, use stiff single piece bats.

However, stiff bats also carry with it the reverse effect. That is, mishit balls with a lot of vibration in the barrel make it directly to the hands. Smaller hitters who see above average pitch speed often find this hand sting unbearable. It is the number one complaint about any particular bat. Factors like cold weather, high pitch speed and faster bat speed are all positively correlated with hand sting.

As well, a single piece bat requires less technology and quicker production time. As such, they often cost less.

It just depends on what you want. Bigger, stronger and older hitters (as well as those who are on a budget) tend to prefer single piece aluminum bats. This is due to single piece’s ability to transfer maximum energy to the ball. Stingy hands, for them, are a small price to pay.

On the other hand, smaller, lighter and younger hitters tend to prefer two piece bats. The smooth smash and big barrel increase confidence and swing speed.

For some younger players, when pitch and bat speed is not very high, then hand sting is a small consideration. As such, there is a huge contingent of budding players who are perfectly happy with single piece bats. And, of course, there are always exceptions to these generalities. 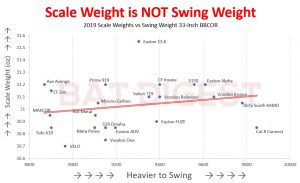 (If you’re looking for the right size bat you might want to start on our bat sizing chart page.)

The most easily misunderstood concept in all of ‘batdom’ is the concept of swing weight. We feel like it is IMPERTIVE that new bat buyers grasp this concept.

If this is the first time buying a serious bat you’ll incorrectly think that the printed weight on a bat is both useful and comparable. That is, a 30/20 of one brand and model feels like a 30/20 of a different brand and model. Sadly, it just isn’t the case.

(If you really want to geek out on bats then see this article explaining it in more detail.)

In short, DO NOT confuse the weight printed on the bat with either the scale or swing weight.

Here are some rough definitions of the three things.

The MOST IMPORTANT thing to know is the swing weight. It is the only number of the three above that actually matter. Sadly, no one prints all the swing weights of the bats. (Oh wait, we do: BBCOR, USSSA, USA, Fastpitch Swing Weight).

Sometimes, bat manufacturers often refer to their bats as end loaded (harder to swing) and ‘balanced (easier to swing). But, the standard for what those things actually mean vary across companies and there is no standard for them to adhere to.

Too many people get caught up in the scale weight of the bat compared to its printed weight. But the distribution of the weight within the bat is way more important as that determines how hard the bat is to swing. This swing weight is the only important thing in terms of the function of the bat.

Your next dilemma in your search for a performance bat is the used or new debate. Turns out lots of folks are looking to resell their bats after a season or two of use. (Not surprising considering the amount of money they spent).

In many cases, especially with a new grip, an older bat makes perfect sense. We like the idea of buying used bats and do it all the time. (We wrote an entire article about the tricks of the trade).

In short, we think it well worth your time to check the used offerings on reseller sites like ebay and sidelineswap. Some major vendors are even offering a used section these days so look close at checkout.

Here are 3 highlights to tricks on buying a used bat.

This Year or Last Year’s Model

Many bats are much like their predecessor. Some are exactly like it. However, sometimes the smallest of changes makes a world of difference. Without surprise, companies aren’t terribly forthright in saying their bat hasn’t changed much from last year. We think our reviews come in remarkably helpful in determining what you might lose out by going with last year’s bat.

Although it really just depends on what you’re looking for, our general guidance on the matter is this: when in doubt, buy last year’s model.

As we state in each one of those articles, the ‘best bat’ is quite an individual decision. Based on your budget, league, size, intent and preference on bat stiffness your best bat could be any number of options. As some proof of this, the market is flooded with all types of bats. If there was a ‘best bat’ it would have coalesced around only a handful of models just within just a few years. But, some years into it, we are wading knee deep through bats from several different companies.

In the end, dialing in the right bat for a beginning buyer will require plenty of reading and looking at any given field you go to. See what the best kids and most experienced kids are using. Borrow a bat from your teammate and give it a go. See our endless amount of reviews and videos.

In the end, you’ll need to pull the trigger on something. It’s probable your first go round won’t be the perfect bat. But, the above steps will get you closer to the right bat than we were when we bought our first performance bat years ago.