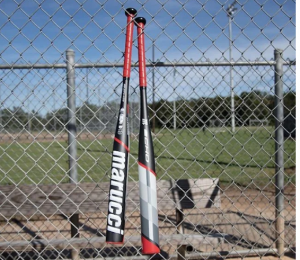 Our hitters preferred the two-piece Echo Connect over the Echo. Although the AV2 Knob in the single-piece composite Echo produced a better feel than other single piece composites like the Mizuno Carbon, the SDX EXT connection on the Echo Connect felt better. We could not pick up any better exit s… Jump to the full review.

Our hitters preferred the two-piece Echo Connect over the Echo. Although the AV2 Knob in the single-piece composite Echo produced a better feel than other single piece composites like the Mizuno Carbon, the SDX EXT connection on the Echo Connect felt better. We could not pick up any better exit speeds on the stiffer single piece than we could on the Connect. The bat’s swing weight felt the same (and our measurements showed them within 2% of each other—which is an indistinguishable difference). But, our hitters were also 14 and 15-year-old nonpower hitting high school players. We’d guess, bigger players who know how to barrel it up and put their weight behind the ball will appreciate the single piece.

We think the Echo Connect, in particular, is a great swing weight option for those who find the Easton Ghost too heavy and the DeMarini CF too light. The Echo Connect has the same swing weight as the Slugger LXT (which sits right on the average line of 2020 fastpitch bat swing weights) and is the ideal weight for more fastpitch players than any other. As such, if you’re in the market for a bat that feels like the LXT (the market’s most widespread bat) but do not want the LXT for any number of reasons, then the Echo Connect is a recommendable choice.

The single-piece Echo is unique. Off the top of our heads, the 2020 Mizuno CRBN1 is the only other performance single-piece composite fastpitch bat. All others are two-piece composite bats with a few exceptions. The Echo, like the CRBN1, feels stiff and swings balanced. But, unlike the CRBN1, the Echo uses Marucci’s unique anti-vibration knob to help dampen sting. Although the Echo didn’t feel as smooth as the Echo Connect on mishits, the Echo does feel better than the CRBN1.

In the competitive fastpitch space, it is tough to recommend anything other than the two or three most popular balanced bats. The CF, Ghost, and LXT have a proven track record and, year in and year out, get rave reviews. But, at some point, enough folks will be willing to try the Echo Connect to give it the online love it deserves. If you’re eager to try something different than the mainstay, expect a great feel and top-end performance in the 2020 Echo Connect.

We think the Echo Connect is most comparable to the Slugger LXT—if you’re looking for a comparison.

If you are more of a power hitter and tend towards a stiffer feeling bat like a Xeno or Carbon from Mizuno, you should take a serious look at the Echo. The Echo’s unique advantage over either of those bats is its sting dampening technology in the knob—which put Marucci and the CAT line of bats on the amateur bat map. With the Echo, you’ll get a stiff feel and all the power transfer to the ball you can muster. (Nothing is lost in the connection piece). Additionally, you’ll get a smoother smash because the knob removes the sting from the hands-on mishits.

There is no shortage of two-piece composite bats. The Marucci Echo Connect competes directly with the LXT, CF, Ghost Advanced, Quatro, PWR CRBN, and Xeno. In terms of swing weight and feel, the Slugger LXT compares to the Echo Connect, while Mizuno’s CRBN1 compares well to Marucci’s Echo.

In June of 2019 Slugger released the 2020 LXT Fastpitch bat. It comes with many of the same great features (even all of them) as the 2019 version. We discuss that, and much more, in this 2020 Louisville Slugger LXT review.

There is NO 2019 Echo. Marucci uses a two-year cycle for their bats, and their last fastpitch bat is called the CATFX. Before that, they produced one called the Pure.

The CATFX bats, too, comprised a single-piece and two-piece composite bat line. The CATFX line of bats never got significant traction, and it was hard to find a robust sample size that had enough experience with the bats to make general conclusions. As we stated earlier, the competitive fastpitch bat market is a tough nut to crack. The entire industry has coalesced around two-piece composite bats, and there is very little room at the top. The top two or three bats in the space haven’t changed in years.

Still, considering it was Marucci’s 2nd year in the fastpitch bat space, the CATFX lines did well enough. At least, well enough that Marucci continues to push the envelope for 2020’s fastpitch market.

The Echo has considerable changes compared to the FX lines. In particular, the bat line has an entirely new composite shell. Now, the Echo uses a multi-directional composite called MDX that could be all the difference they need to break into the shortlist of best fastpitch bats. The Echo Connect uses the same connection piece found in Marucci’s top-rated CAT 8 Connect.

The significant difference between the Echo and Echo is visible enough. The Connect uses a connection design (Marucci calls the SDX EXT) to combine a composite handle and barrel. The Echo (not Connect) is a single-piece bat with no connection piece.

You can read about the differences in Marucci’s blog post about the two bats.

The Echo and Echo connect come in a vast range of sizing. Each line comes in a drop 8, 9, 10, and 11. The bats come in anywhere from a 28 through a 34-inch depending on the size. You can see the full-size options here.