We hit with the DeMarini CF Insane over 400 times. We used 3 different hitters, tracked the exit speeds and ball carry distance. We also measured the bats barrel size, figured the swing weight and read everything we could on the bat. That data, combined with our extensive experience with fastpitch bats comprises the following 2019 DeMarini CF Insane Fastpitch review.

In short, the bat is one of our favorite best power hitters bats.

Looking for the Review on the 2019 CF Insane in Baseball? 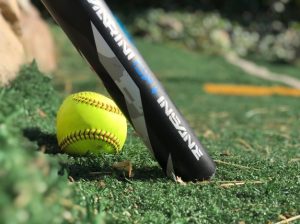 The CF Insane, not be confused with the 2019 CF Zen, is a two piece composite fastpitch bat with a more endloaded swing weight. Granted, it does not swing as heavy as a bat like the Slugger PXT, but it does swing about 10% heavier than the CF Zen. The Zen is the Insane’s lightweight and more popular cousin. (See the fastpitch bat swing weights). 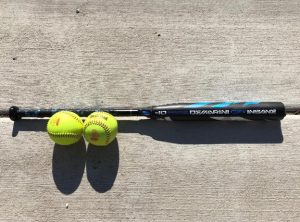 Remember, swing weight is NOT scale weight. Swing weight is more dependent upon how the bat’s weight is distributed along the length of the barrel instead of how much the bat weighs in total.

Aside from the name and paint job, there are no differences (as far as we could tell) between the 2018 CFX Insane and the 2019 CF Insane. This is not uncommon for major bat manufacturers to have an old bat and a new paint job. Some take flack for it.

However, bats in a given year are made for certain inventory levels and resupplying them with a colored up version makes marketing and consumer sense. As well, we can’t expect bats to get better and better all the time. Turns out, too, the CFX Insane is a fantastic bat as is the CF Insane will be. So, hard to complain too much about a good bat.

That said, if you can find the 2018 version of the bat new in wrapper with warranty we would not hesitate on it when compared to the 2019 CF Zen. In time, the 2018 CFX will be out of stock. Then, obviously, go for the CF Zen Insane. Both bats use the same Paraflex composite in the barrel, 3-fusion handle and 3-fusion end cap. They also use the same grip as well as the same handle and knob too.

In terms of swing weight, the most common and similar bat to the CF Insane is Louisville Slugger’s XENO. Both these bats have the same construction (two piece composite) and swing weight. Barrel sizes are comparable too.

However, the Insane is more expensive than the XENO (at least MSRP). As well, the IST connective piece on the XENO is remarkably stiff and delivers more feedback on the hands. DeMarini’s CF Insane is a smoother connection that doesn’t give the same kind of feedback but feels real good on both hits and mishits.

The other option to consider for 2019, if you are looking closely at the 2019 CF Insane, is Mizuno’s new Carbon Power 2. This bat feels a lot like the CF Insane with a smoother connection point when compared to the Zen.

However, the lack of long term pedigree on the Mizuno Power Carbon makes it a bit of a wild card when compared to the well established CF Insane. All things on the Power Carbon are new this year. The CF Insane has nothing new but a paint job.