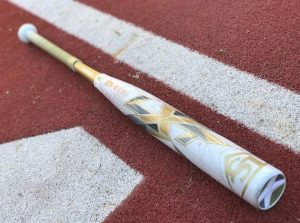 That data forms all of our fastpitch bat reviews. The LXT is a good fit for the fastpitch player who is serious about fastpitch, has the budget for it and is looking to find as much bat speed as possible. Our… Jump to the full review.

That data forms all of our fastpitch bat reviews. The LXT is a good fit for the fastpitch player who is serious about fastpitch, has the budget for it and is looking to find as much bat speed as possible. Our insights on the 2019 Slugger LXT follow.

The LXT often sits atop our list of the 7 best fastpitch bats.

As a light swinging, big barreled fastpitch bat with a number of sizes and drops the LXT comes recommendable to a number of players. The fact it delivered well in our exit speed test was useful too and, at least in some cases, justifies its price point.

We would recommend it to players of all ages who are taking fastpitch very seriously. Those who need or prefer a light swing for as much bat speed and control as possible will really like the LXT. It’s top end performance is proven at every level of fastpitch and the bat comes highly recommended.

Functionally, the 2019 and 2018 LXT are very similar. Both use the same type of composite in the barrel, have an ultra lite end cap (they call this the X-Cap) and use a synthetic grip on a 7/8 handle. (See our 2018 Slugger LXT Review). They have "upgraded" the connection piece from the Tru3 to the VCX. Both techs claim to let the barrel and the handle move independently. We felt no difference between the newer VCS and the Tru3. But, we do know the Tru3 had a few durability issues so it is possible the VCX is breaking from that a bit. We were fans of the Tru3 tech, especially in the baseball space. No connection piece, even the famed 3-fusion/D-fusion from Demarini compared to the Tru3. If the VCS is a better long term play, in terms of durability, then the Tru3 then we have no doubt we'll love it. In other words, we don't see much change from the 2018 to the 2019 model. If you can find the LXT in a 2018 version new in wrapper and a discount we would suggest that one over the 2019 version (for price reasons only). But, when inventory levels settle down, expect both the 2019 or 2018 to be a really good choice.

We spent 2 hours in our cage comparing the 2016 Louisville Slugger LXT PLUS Fastpitch softball bat (Ebay, Amazon Price Check) to other similar designs in the market. We received feedback from 4 different hitters---each of whom play competitive fastpitch.

Although built with a different barrel idea (the LXT uses some ring technology on the inside) the CF Zen swings and feels a lot like the Slugger LXT. Both bats have similar swing weights and use similarly constructed two piece connections that are smooth on hits and mishits alike. The price points are identical as is, roughly speaking, the demand for both bats.

The CF Zen and the Slugger LXT are, hands down, the two most popular light swinging fastpitch bats in the market today.

The only considerable difference between the two is that the Slugger LXT comes in more drop options. While the Zen comes in only a drop 10 and 11 while the LXT comes in a drop 8, 9, 10, 11 and 12. Granted, if you need a bigger drop (like an 8 or 9) you can always look to the CF Insane line. But, if you want a drop 12 then you only have one option: The 2019 Slugger LXT.

Which one do we prefer? Claiming one is better than the other is nothing more than splitting hairs. The bats are fantastic and you really can’t go wrong with either one. If you are stuck between the two–and can’t find them priced any differently, then flip a coin.

The LXT measures out as Slugger’s easiest swinging bat. We measured the swing weights of every top end bat on the market and found it to be well under the average. The 2019 LXT was 5% lighter than the Slugger Xeno and over 10% lighter than the PXT. (Note, this was in the drop 10 32/22 space). It is safe to say the LXT is the lightest swinging bat in the Slugger lineup of top end fast pitch bats.

Barrel size on the LXT looked good, too. It found itself right in the middle of the top end fastpitch bats. Right next to the XENO.

Is there a break in period with this bat? Or is this a bat hot out of the wrapper?

You’ll need a little bit of a break in period here. But, Slugger says it’s less than other composites. We aren’t so
Sure if that. We’d go 200 bits around the barrel to work it in.